I'm not the first

...and I won't be the last to post on this theme today. But I don't care about being unique or original.
Today I care about showing my respect and paying tribute to those who lost their lives on this day 8 years ago.
September 11, 2001 is THE defining moment for my generation. It is the one event that everyone in the western world will remember. It is my generations JFK murder.
I remember exactly where I was and what I was doing.
Heck I remember exactly what I thought and felt as the morning unfolded.

I walked into work, a rare for me morning shift. At the time I was a front desk clerk at a motel. We had a small TV at the desk, ostensibly so we could check out movie functions for guests. But it also had the cable package that all the rooms had so the regular front desk clerk always had it tuned to the morning news.
It was 10 to 9 so the first plane had hit. My thoughts were "How the heck does THAT happen?! That is a horrible accident! Pretty strange too."
My co-worker told me that they (the news anchors) were saying it was an accident, as I thought, but other reporters were saying the plane was hi-jacked. 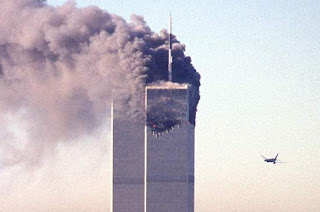 I went into the kitchen to get my coffee. Of course the news was all over the radio. I listened for a few minutes more and walked back out to the desk. Still thinking what an odd accident that was and feeling horrible for all the people involved. Then, shortly after 9, the TV showed the world that it was indeed no accident when that second plane hit. 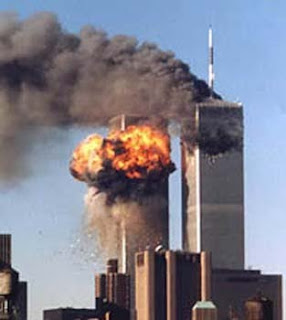 I felt sick. I knew that the world as we know it had changed. About a half hour later we heard of the third plane at the Pentagon. Then another half hour later we heard about the plane that crashed in Pennsylvania, thought to be heading for the White House or the Capitol.
I started that morning in disbelief over an odd accident. That feeling remained but was joined by shock, by horror, by fear and by anger.
Yes anger. I was (and still am) angry that we live in a world where something like this could happen.
I myself do not directly know anyone that died that day. Or even close family to them. However this event has touched the life of everyone in North America, if not the western world.
I do not agree with everything that has come about because of this. Some things I don't think should have changed have changed. Some things that I think should change have not.
One thing that I do believe is that whether or not you agree with the military events that have followed you should damn well support those men and women that put their lives on the line to protect your rights, freedoms and lives!
That we need to show respect for those who lost their lives that day, and the ones that were left behind to pick up the pieces. Show your respect and support to those who have lost their lives in the days, months and years that followed. Soldiers, rescue and recovery workers, people who lived or worked in the area, reporters, photographers, everyone.
I feel grief whenever I think of that day, not just on the anniversary. But I try to remember to hope.
Hope that there is a better future and that this will never happen again. But for that to be true we have to remember that it did happen. 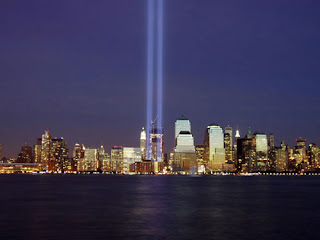 Email ThisBlogThis!Share to TwitterShare to FacebookShare to Pinterest
Labels: 9/11, military