It may not seem like winter is over, especially the last few days... cold set in and a blizzard, yay Saskatchewan weather :/   I just hope that counted as March coming in like a lion and it remembers to go out like a lamb!
It is however getting to be the time of year to take ponies that were either lightly worked or had the winter off and start easing them back into the real world. Voodoo has been ridden once or twice since December, Frosty was off due to his heel injury but has had three rides in the last six or so weeks, Lefta has had about a dozen rides since January, and Odin... poor Odin has had no rides. And he won't know what hit him - he's going to get legged up because he has a Tilley clinic in June.
I've also signed up for two barrel clinics, going to try to see what works for me now that Ed isn't here to put up with me and set me straight :(   Andrea Udal and Shannon Blakely, both of which are being held at my arena. So far I'm not sure which horse will be used. In the meantime, I'm going to try to get riding as much as March allows. The goal is 3x/week but we'll see how the weather cooperates! But judging from the pic below it's definitely time to work on our fitness! 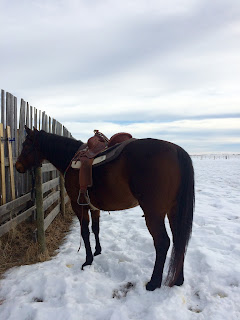