Look what came in the mail today!! :D 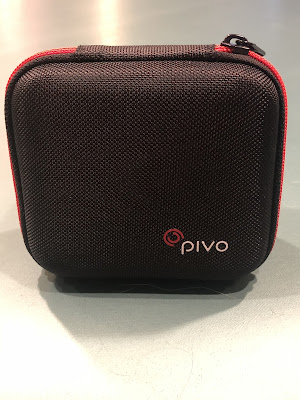 With riding by myself a lot, and with the next few years having green horses to work with it just seems like a smart idea.  I know last fall when I was putting rides on Paige for my friend/boarder I sure wished I had someone to video me - or a Pivo ;)
So when they went on sale again recently I bought one.  I went with the silver over the red because it's supposed to be 2x faster.  I chose the starter pack which includes the Pivo pad, the smart mount, and a carrying case.
I've been watching a few videos that friends have been posting and even with darker horses and clothing they're videos have been good.  Which was a concern for me with my herd of bays lol

I'm hoping to get familiar with it the next few days and maybe by Sunday take it for a "test ride"
Does anyone else out in blogland have a Pivo?  Any tips to share?
And for anyone who's interested in buying one here's a link
https://getpivo.com/?ref=fjpap3kudmco
at March 25, 2021 2 comments:

Email ThisBlogThis!Share to TwitterShare to FacebookShare to Pinterest
Labels: Pivo

I had been thinking about replacing Betty, my truck, for a few years now. But recently it became a need not a want. 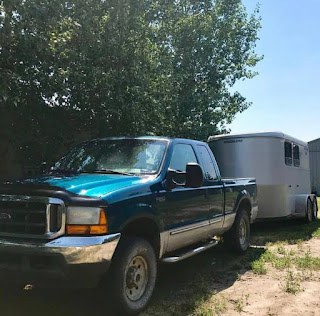 After a lesson in December Betty left me stranded at Coach's with a trailer full of horses. BUT if you're going to be stuck that was the place to be... her husband is a 'car guy'. Not just a car guy though, he owns a repair shop and is head of a classic car club.  After trying everything he crawled under Betty and banged on her starter until she fired. He recommended a new starter, and that a reconditioned one from a salvage would be my best price.  His last words as I drove away were do NOT shut her off until you're parked where you want to be, and that needs to be someplace you can crawl under and get that starter out.

Now, I'm super grateful to have some handy friends.  My friend RJ said it would be no problem to replace the starter, we just needed to wait for a bit nicer weather. 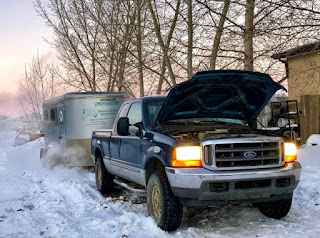 After the starter was replaced I started Betty a few times and everything seemed fine.  Then I booked a lesson and after the lesson... dead. Again. And this time no amount of banging on the starter would get her going.

Coach and her hubby said it was ok to leave her where she was until the weekend (this was a Monday I believe) and in the meantime he'd order a new starter through his shop, we figured the salvage starter was bad. I had hauled with one of my boarder's so her dad came with their truck and trailer and got the horses home.
Saturday RJ and I went to try to get her moving. No luck even with the new starter and we were running out of daylight. Arrangements were made to come back the next day.
RJ and Coach's hubby ended up getting her started, by boosting her with the cables hooked directly to the starter! Again I was told only shut her off when she's where you want to work on her. The guys figured it was the ground for the starter and RJ reassured me he could fix it and it wouldn't be expensive.

After talking to Hubster though I decided NOW was the time to replace her.  I just didn't feel I could trust her anymore and she IS 21 years old!
RJ and I made a deal on her (he flips vehicles on the side) and now it was time to go truck shopping. Which was a whole thing unto itself.

So bye bye Betty, my first truck of my own. Bought and paid cash for her 11ish years ago. You've been good (most of the time lol)