I LOVE this stuff!

My absolutely favourite product for detangling manes & tails is Absorbine's Show Sheen gel.  It's a not as heavy and sticky as hair gel, but it's a bit thicker than baby oil.  It's nice because, unlike the spray, you can get it exactly where you want it and it doesn't end up on the coat instead. 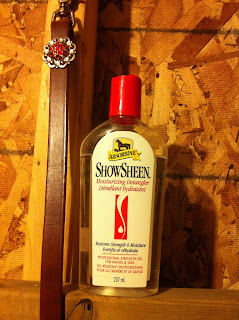 **please note, I have not in any way, shape or form been compensated by Absorbine for this post**

Usually I'll groom my horses and then put some Show Sheen gel in the tail & mane.  Which ever is worse for knots & tangles is the one I brush/comb through last.  In the case of today's model, Voodoo, his mane was horrible.  It was full of lots of witches knots and almost dread like twists: 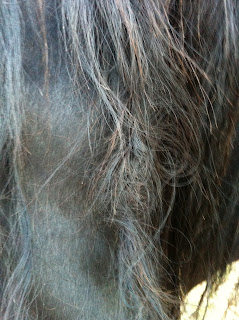 I put the gel in his tail, put more in his mane and then went to comb through his tail while the gel soaked into the knots in the mane.  Not soaked as in super wet, but as in it had time to work down into the hairs.
When I was done his tail I went and picked through his mane, some with my fingers and some with the wide tooth part of my comb.  Finally I combed through with the fine side and his mane was tangle free, smooth & shiny: 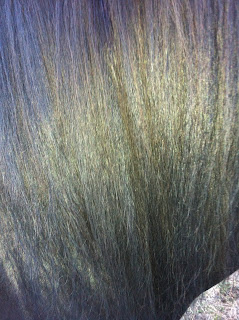 His tail wasn't as knotted as his mane, that change wasn't as dramatic so no "before" shots to compare to but here's his tail all gel'd and combed out: 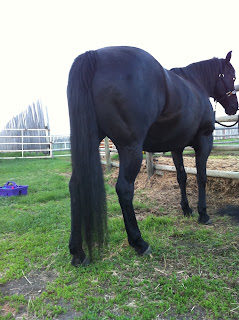 Good day for a project!

I've worked a lot these last two weeks and Saturday was the first real day I had off so when it rained I was a bit bummed. But it turns out there was a silver lining... it didn't rain hard enough to make things muddy and messy, instead it was just drizzly enough to dampen the ground to be worked Sunday. So when I got back from brunch with the girls I fired up the tractor and headed out to the pasture to try to reclaim my track.
As you can see it was in need of rescuing! 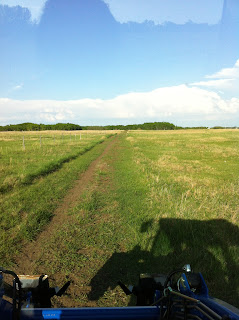 All the rain we had last year made it really hard to get out there to work it before the weeds & grass took hold.  I did make one good pass on it last fall but it was basically unusable all year.
Today was the perfect day to get out there.  The grass & weeds didn't have too good of a hold yet and the ground was soft but not sloppy from that light, steady rain.
The horses are currently turned out in this pasture.  As you can see they were terrified of the tractor lol  There's actually two horses in this mirror pic.  Tavi (sorrel) is easy to see but Odin (grullo) pretty much blends into the background.  Those two, Lefta & George followed me around for a good while. 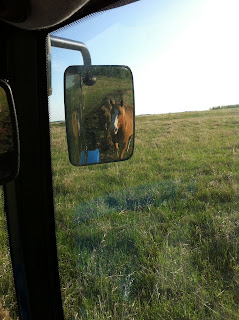 After the peanut gallery finished following me they went back to grazing.  I had to laugh when I looked over at them and saw them munching away at the grass on the uncultivated part of the track!  I guess they wanted to get that tender spring grass before it was gone lol
(it takes two passes of our little tractor to work the track.  It's about 12-14' wide and our cultivator is only about 6') 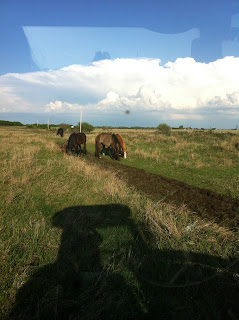 I worked the track counter clockwise then turned and worked it clockwise.  It's not finished yet but it's definitely WAY better.
Next time I'll hook up some harrows.  I don't want to cultivate it too much, otherwise it will get too deep.  The footing isn't perfect but it is usable and I have a hunch that once it's harrowed it will be pretty darn good. 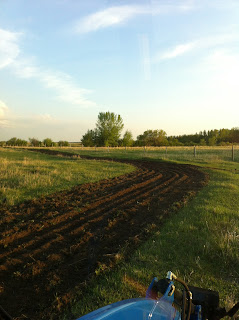 I would never have thought of working up a track out in that pasture but it was there when we bought the place.  I'm pretty glad to have it too... it makes a nice place to work a horse at speed plus it's somewhere to ride besides the arena.  We've only got 74 acres and you can cover that pretty fast even just walking/trotting.  I don't like riding out in the ditches here because people drive like yahoos and there are often bottles & cans hiding in the long ditch grass.
at May 27, 2013 3 comments:

Running around in circles

Well, that's the plan at least!  Barrel racing season is in full swing, I've even got a couple double headers booked at my place :)

The barrel patch and the arena are looking good so I have places to practice, I just need to find the time!  And the time to get them legged up and keep them that way.

To qualify for Provincial Finals I need 6 jackpots per horse.  For our Mini Finals (district finals) I need 3 per horse and 6 separate District 1 jackpots as a rider (ie taking 2 horses to a double header would only count as 2 jackpots for the rider although the rider is entered 4 times)  Looks like the clock is ticking!

I have three horses for barrel racing and a two horse trailer so that's a bit of a sticker, I guess I'll have to pick and choose who I think will run best indoors for PF.  If possible I'll see if I can hitch a ride for the 3rd horse to MF so I can enter all three.  Time will tell I guess.

After having the blahs this winter it's kinda just hit me that the barrel racing bug has bitten again!
at May 22, 2013 4 comments:

*first let me apologize for the poor quality pics,
I just had my phone with me*

As of Monday (yeah, Monday... I'm a bit late posting lol)
Anyway, as of Monday I've now put at least one ride on each of the four saddle broke horses this year.  That's not a lot of riding, but considering winter just seemed to finally end that's not too terribly bad.

Monday was Smudge's turn and since I've added all the horses to my "stable" on my phone I weight taped him before I rode.  Holy smokes he is fat errr big.
The pic below doesn't do his size justice.  And no, I'm not telling you how much the tape said he weighed, but I will say that my guess was DAMN close! 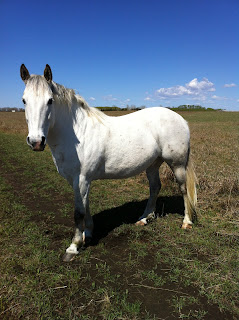 I joke that he looks like a war horse.  In some ways he does, he'd probably look great as a mount for those people that role play medieval times (you know, whatchamacallit... Society for Creative Anachronism?  Is that what I'm looking for?)

Smudgers was pretty good considering he hasn't been ridden in a.g.e.s. but he does need a few more tune up rides before he can resume being 'the company horse'.  And from the sounds of it he is going to be in demand a bit this summer :)  He's a pretty nice ride, with his broad back and hip swinging walk you sure feel safe up there.  His trot is nice and he's got a great, smooth lope too.  But because he's youngish and had all that time off he's also a bit lazy, opinionated and stubborn.  Which means that he can get pretty strong when he decides he wants to head for the gate.  Or try trotting off when you want to walk.  And with that big, thick neck he takes some muscle to convince he needs to listen to the wimpy human on his back lol 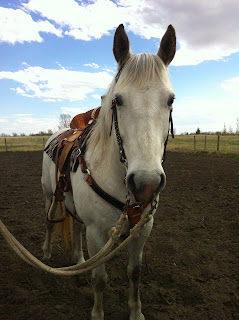 Post ride pic above, he's looking all innocent, and nowhere near as fat as he really is lol.

Little did he know he was about to be introduced to Mr. Water Hose to spray down his sweat marks and, more importantly, to wash his tail.
Ugh, his poor tail.  It was sooo gross.  It was so stained it was almost tobacco juice brown/yellow.  Ick!!  Thanks to some nice "white horse" purple shampoo it is, for the most part, back to silver.
Smudge was great for the tail washing, however when it came time to spray his body down he was a bit of a brat.  Until my friend Janelle held some cookies, the way to Smudge's heart is definitely his stomach!
I really think that he's never been hosed down before.  Considering his past as a ranch horse that's not too shocking. 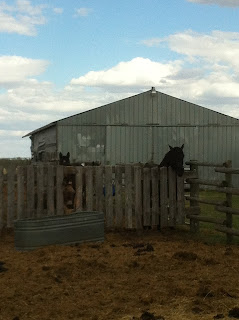 After Smudge was hosed off I tied him to a fence post to dry off and looked up in time to see the glares.  It was pretty funny.  This is not the clearest pic but Voodoo is on the right, you can see the top of Lefta's head & her ears to the left and just in front of her, with his face squeezed in the gap of a missing fence board is George.  You could feel the waves of jealous coming from the peanut gallery lol

Email ThisBlogThis!Share to TwitterShare to FacebookShare to Pinterest
Labels: Smudge

The end of the never-ending winter!

Finally!!!  After a good six months of snow on the ground, winter is over!

(despite the jokes about Saskatchewan having 10 months of winter that's not the case, normally)
There's still some snow but for the most part it's melted.  There has been some flooding, although thankfully not at our place.
Best of all, the ponies are back on pasture!  Sure, it's dry, fall grass seeing as the spring grass hasn't even had a chance to grow yet... but between watching the dwindling hay supply after the extra long winter, having the last of the cattle hay buried under a massive snowdrift, and having the hay barn blown in after the last storm (the same storm that buried the cattle hay, and resulting in some ruined hay in the hay barn) it is a HUGE relief just to let them through that gate to the pasture!
I have to admit, it's also nice to let them out to pasture so they can stretch their legs, play and get the sillies out before I get back on them again too! ;)
Which is the plan, starting tomorrow!  The arena will need some work before I can ride in there but the barrel patch is usable.  Now I need to come up with a game plan to fit riding in around work.  I love this "new" job (wow I've been here 8 months!) but the schedule kinda sucks for fitting in horse & outdoor stuff around work and being able to see Pie with his odd schedule.  It will happen though!
at May 05, 2013 1 comment: