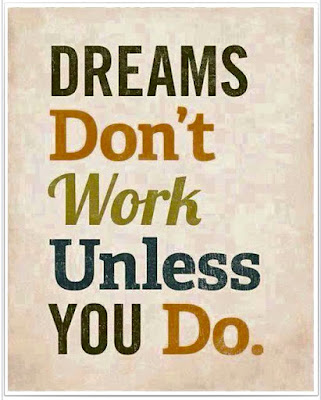 Email ThisBlogThis!Share to TwitterShare to FacebookShare to Pinterest
Labels: motivate

If you've read my blog for any length of time, or picked out the labels for barrel racing, you'll know I barrel race but on a low level of the sport.  I don't rodeo, I don't futurity, I do compete in a provincial organization that is based on a 3D format
(there are some 4D events as well).

Why?  Well there's a variety of reasons but chief among them is I don't have the time or money to rodeo - heck it ain't cheap!  Nor do I have a horse that would be competitive at that level - although maybe one day that won't be a factor.
(sidenote, you can spend $8K to get a 2-3D jackpot horse in my area, and that's on the low end)
Another big reason for me is that horses are my hobby not my career, they're supposed to be fun - and usually they are, but of course there are 'those days'.
(I need to bring my competitive side out more - as per some friends - and trying to find the balance between that and fun is a whole 'nother blog post!)

Every once in awhile some discussion will pop up in some form or another regarding barrel racing and the D system and often in these discussions there will be some disparaging comments about the girls that place in the bottom Ds, things like "they could be 1 or 2 D if they worked harder".
Now there may be some that take it lightly or don't put much effort in, but there are others that do take it seriously (even if, like me, it's "just for fun").  They may not be able to afford the kind of athlete that places in the 1D so they take the horses they CAN afford and make them what they can.  They train, take clinics, take lessons, read, study and devour everything barrel racing that they can get their hands on.  They study feed, supplements, and therapies.  They work to keep their horses conditioned and in shape.  They work their butts off.
Comments about 1D (and sometimes 2D) riders and horses *deserving* better prizes/payout because they work harder may not be outright calling down on the 3/4D horses but it is belittling and saying they don't deserve the same for their achievements and is really  disheartening for those riders to hear.
Now I'm not saying give everyone a participation ribbon, but if someone places they deserve to be treated like a winner because in their D they are!

Another one of the comments that is ugly is that because they're "only" 3 or 4 D they aren't really barrel racers - and to that I say excuse me, I've got a buckle that says otherwise ;) :p 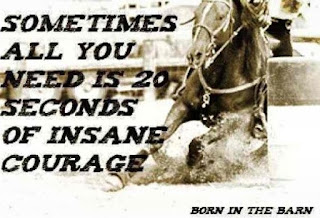 What upsets me about this type of thinking, other than the fact that it's small, petty, and mean, is that in the grand scheme of things the horse world is a small place and it is widely acknowledged that equestrian sport (or heck even just owning and/or riding without competitive goals) faces a decline of new people - those baby boomers are aging out, who is stepping up to take their place!?
We need to do what we can to promote our sport and encourage others to give it a shot, which is exactly what the D system was designed to do!  It creates a chance for riders and horses of any calibre to get some experience and maybe earn some cash/prizes/bragging rights.  Instead of belittling or negating the achievements of the lower D people we need to encourage them... heck some of those "little" 3D racers ARE going to be 1D and rodeo winners some day!  Might as well be on friendly terms with your competition ;)


Ocassionally Voodoo has a bit of a gate issue, not terrible **knockwood** but still, not a fun or good thing.
I stumbled across this short video by PJ Berger and really liked what she had to say:

Some of the stuff I liked and took away:
* check out different reasons for the issue: maybe your horse needs some down time, maybe it's a pain or medical issue.
* stay ready to run but keep relaxed while you're waiting.  It won't kill you to not visit your friends for a few minutes.
* some horses need to move to stay relaxed, it doesn't take a lot of space to keep them moving
* try to avoid turning around if you get held up
* ride like you train!  If you train with hands low, keep them low and vice versa
* keep yourself relaxed, did y'all catch how her horse reacted when she 'tensed up'?
at April 12, 2016 2 comments:

My heroes have always been cowboys

If you're at all interested in barrel racing you are probably well aware by now that we lost a great man, a true horseman and teacher.  Ed Wright, "papa Ed" or "grandpa Ed" to many, many barrel racers, was found dead in his barn Monday 28 March 2016.

I consider myself so fortunate to have ridden with Ed and have him for a friend and mentor.  He may have been tough but he was always fair and he tried to temper the tough love with humor.  When I'm struggling with something and get it right I often hear his "good job baby" - high praise from Ed indeed ;)
Ed was kind, tough, funny, humble, a heckuva horseman and so strong in his faith without "pushing" it at people... I have so much respect for who he was and consider him a role model both in my horse life and personal life. 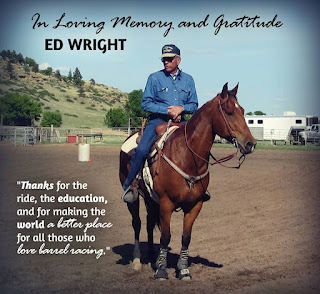 To show our appreciation for his teaching and in honor of Ed there is a 'movement' (for lack of a better word) to put a lime green ribbon in your barrel horse's mane while racing this year.  I know my horses will be rocking their ribbons!   Thank you Ed -- RIP 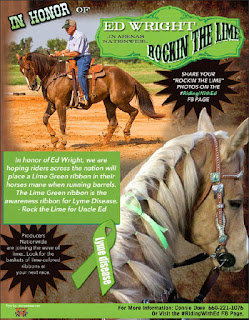