We had a jackpot today and someone had suggested we dress up. Being that Voodoo is black I opted for Zorro (my cape was tucked, errr crammed, into my pocket for safety lol) 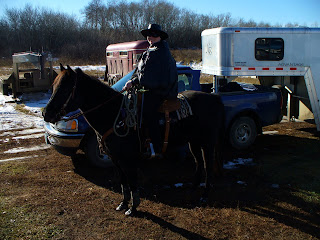 photo by K. Hoover
The jackpot was right next door so I had it pretty easy today. I woke up a bit early and fed the ponies, came back inside and had my breakfast, walked over to enter, came back home and when it was time I got costumed up and tacked up and rode over. Love it!!
It was a double header and my first run was slooow. But it was clean and that's what I was working for.
I had talked to Ed Wright earlier this week and he said that even though I knocked 3rd at my last barrel race he was proud of me for cleaning up 2nd. Well now I get to call him and tell him I had two cleans runs and even earned some cash!
Yep that's right, in the second jackpot I sped up enough to place! We got 3rd in the 3D. Still no speed demon (hey THAT woulda been a good costume!!) but we ran 1.5 seconds faster :)
AND we won "best costume" in the Open ("adult") division!

Hope y'all had a safe and fun Halloween!

NO I have NOT seen your lipstick!

Why would you even ask me that

Every time something goes missing around here everyone looks at me! 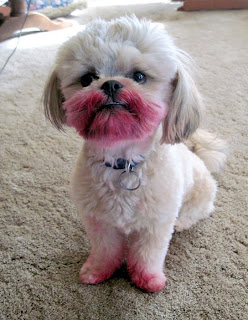 *not my pic, unsure of source*

So how was your day?

Last night we got our first snow of this winter (even though its still technically fall according to the calendar)
Doesn't look like much in this pic but it wasn't done yet... 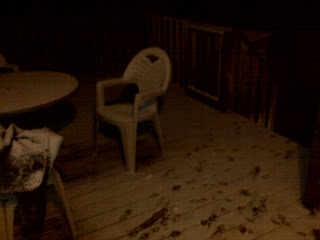 The dogs & indoor kitties decided it was a good evening just to chill out. Tucker had been curled up in my chair with me when he moved to the couch so he could stretch out. 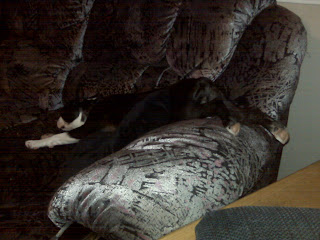 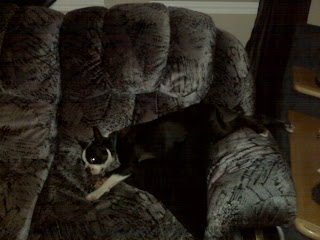 Lola took over the empty loveseat 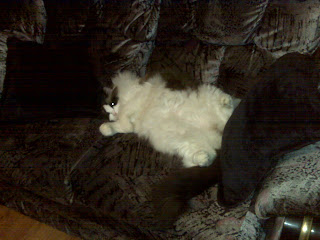 By the time I went to work this morning there was more snow. Not a lot by any means, just enough to make things crappy when you combine the snow with the not too cold temps and high winds.
The highway was icy and slushy... stupid slush got hold of my tires and pulled me into the ditch. (I wasn't even going fast, I was going 70 km/hr and the speed limit is 100)
I managed to stay calm and in control and ALMOST got out of that ditch. Unfortunately I was running out of room to make it back onto the road and that part of the ditch was very steep. The steepness and the icy slush on the grass sucked my poor little Chevy right back into the ditch.
It could have been much worse though. Those ditches are FULL of sloughy water. If I had panicked and not kept my cool I probably would have landed right in it. As it was when my vehicle came to rest the back tires were in the water.
Onstar put me through to roadside assistance, the wait for a tow was 45 min to an hour (which means at least an hour to an hour & a half lol). Some Good Samaritans had stopped to help and offered to drive me in to the city and drop me off at work :)
(over 30 cars drove by before anyone stopped)
Roadside wouldn't tow without someone there so I abandoned my poor vehicle to make arrangements later. When I got to work I tried to 'accidentally' leave some money on the back seat but the GS saw it and literally threw it out the window onto the ground lol. Such nice people and I have no way to thank them!
From work I made arrangements with Roadside to be picked up after work by the tow truck driver and taken to my vehicle. When we got there we boosted it and winched it out.
Not sure if you can tell from this crappy cell pic but its pretty close to the road and those back tires are in water... yikes! 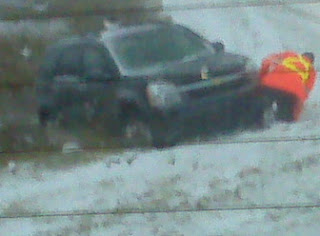 From there I made it home safely. Now here's hoping Pie makes it home safe tonight after he's done work!!

I keep wanting to post this commercial, for my fellow Canadians you`ll know its a few years old. Still cracks me up though!

A man boards an airplane with six small children.

"Oh goodness! Are they all yours?" asks the stewardess.

When we moved we got kittens from a couple different people. First was Evie, from my friend Zab; then Ethel and Olive from my stepdad (who in turn got them from the ethanol plant he works at); and then Oleta, also from Zab.

So there we were with four barn kittens with names that made it sound like there was a group of little old ladies hanging out at the barn.

The other day I discovered that I don`t have ``4 little old ladies`` at the barn. 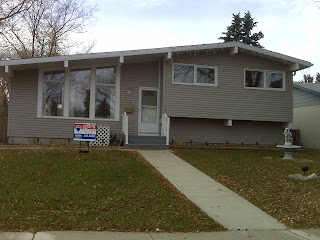 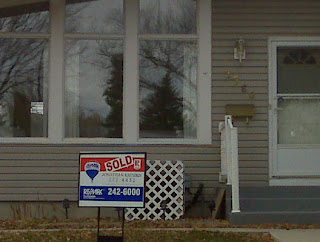 I do see how some people would end up breaking down and crying at his clinic.
(and there were a few at our clinics)
People who have really been struggling with a horse that has should be really good but can't quite get there, and he shows them and they have that "lightbulb moment", and everything starts to groove better.
Or the people who are so resistant to accepting its them and always feel the need to blame their horse.
Or the people who go in with a closed mind, they go to clinics but just aren't ready to listen and learn.
Or the people who just can't stop and say "Huh? I don't get it." so that Ed can explain in a different way or show you so that you DO get it.
Yeah I can see them crying.

The first day was loooong. There were 16 girls signed up, I was girl #8. Clinic started at 8:30am with a lecture (or 'classroom') part of the day and a prayer. Riding started around 9:30ish. I rode around 4:10, I was "finished" (the riding part) by about 4:35. We went through the order and everyone rode a second time. The day finished up at shortly after 9pm.
Now some people are sitting there thinking "Well shoot she sure didn't get much riding time" don't worry... at Ed's clinic you don't have to be in the saddle to learn.
As Long As You Pay Attention.
During most of the 7 riders before me I sat in the stands and just tried to focus and absorb everything Ed was telling/showing us. (I did have to leave for a bit to get Voodoo ready) Now usually I have to DO what I'm trying to learn, especially 'horse stuff'. Reading/watching doesn't work as well as doing. But I turned my brain into a sponge and tried to soak in as much as possible. And some of it worked.
For instance every single girl that worked before me (and almost everyone after me) got a rubber band in their horses mane to show them where Ed wants our hands. I really worked on that hand position while warming up. As a result no rubber band. The only corrections Ed made with my hands was HOW I was using them to ask for turns - results were a huge difference.

This clinic was hands down The Best clinic I've taken. Not just in barrel racing but of any kind of horse clinic. IMO Ed isn't just a barrel trainer, or a horse trainer, he's a horseman. The horse is the #1 concern to him. More than a few times his answer to a girl that asked if she was finished was "Well your horse is for now, YOU aren't. You sit your butt down and pay attention."
Ed was always welcoming to anyone that wanted to ask questions during another person's work time and anyone there was free to come out into the arena to see what was going on.
For example when I went to work the second day I wasn't too sure on where to place the cones. I sure as heck wanted to know that so I could practice at home. Another lady asked if it was okay for her to tag along while I set cones and Ed said "Well of course. You'll learn more that way than all them up there gossiping in the bleachers." And you know what, Ed made me set cones for myself and for the next girl (I go left, everyone else went right) to make sure that I understood. He also got me to explain why I placed the "action points" where I did so that he knew I got it.

I found Ed to be pretty funny, on the border of goofy at times. As he said "I'm not here to entertain you. I'm here to educate you. But if I can entertain while I educate you're more likely to learn." Now he wasn't all lovey-dovey, he was encouraging... there was plenty of girl, baby, love you. But he would get straight and serious and tough if you weren't getting it.

I am so looking forward to next year, even if for some reason I wouldn't be able to ride (ie I was hurt or my horse was) I will SO be going to this clinic. Cost of auditing it alone is worth the info you get, even if you're not a barrel racer.


ps - my "goals" from my previous post were half-joking half-serious. Of course my other goals were to learn and try to have fun.
at October 06, 2010 9 comments:

Email ThisBlogThis!Share to TwitterShare to FacebookShare to Pinterest
Labels: Clinics

What was I thinking?

Its going to be a crazy busy next couple days. Because its Ed Wright clinic time!!
Truck and trailer are hitched up, although neither one found the time to get themselves washed (which I think is pretty darn inconsiderate of them! I understand the trailer needs the truck to take it but the truck could have found time lol)
Saddle, pad, boots and assorted headstalls are loaded. Brushes & liniment (maybe liniment will be more for me?). Everything but the hay bag and the horse. (Voodoo is the "lucky" candidate)
As for me, I literally just got home from work. And I'm nervous. Truly.
So nervous I had the following dream, which I will summarize for you:

I go to clinic. I suck. SO bad that Ed tells me I'm wasting his time as well as everyone else's. Oh and I'll never be a decent barrel racer OR rider and my horse is pathetic too.

So to try to chill out I came up with the following goals for the clinic: