have my little cows gone? Oh where, oh where can they be?
And I DO mean little. A couple weeks ago Pie & I got a little steer, Stubby: 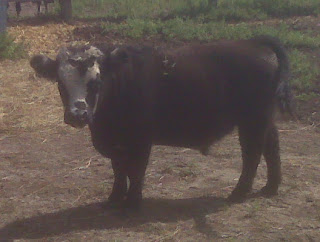 And a little bull, El Toro: 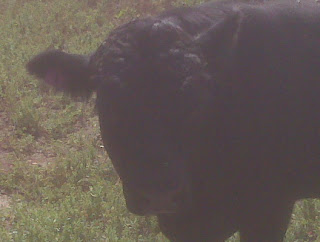 They are both Lowlines and the steer is ours but the bull belongs to a friend. ET only came to live here to keep Stubby company. IF we decide to go ahead and get some more cattle and have cows to breed we could breed to ET.
We settled both boys in as per DBs directions. I followed them to the "t". However a few days ago I let them have access to the pasture and lately I haven't seen them. At least not up close. :(
I've checked fence, both by horseback and by quad, and the fence is up. I've ridden through the pasture to look for them and there is one bush I can't get through that they might have. Kinda hoping that's where they've been hanging out.
Friends of mine that are cattle ranchers (The Farmer Fehrs) have told me not to get all panicked. That every single day someone has cows get out. It just happens. I know I've seen neighbour's cows out.
So I'm trying not to get stressed and worry.
We've talked to a couple neighbours and put up a poster at the local gas station/post office just in case they did manage to get out and are hanging around in a neighbour's pasture.
I sure hope they show up!
(and if they don't we will be paying DB for his bull)
In the meantime I'll keep a familiar tune in my head "Where oh where..."

I was originally going to use this as a "Wordless Wednesday" pic. But I didn't get around to it in time and I probably wouldn't have been able to post it without rambling a little.
It is the very first picture I took when we moved to the new place... 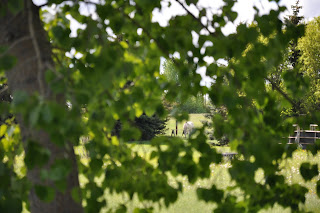 There is a horse in it, if you look closely. Cropping it and blowing it up its kinda blurry but here's a closer look... 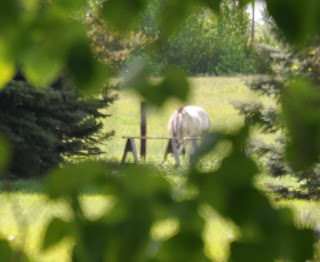 I had put the horses out into the small pasture and was sitting on the steps to the deck enjoying breakfast. I had my camera and the horses had wandered back to the gate (after tearing around kicking up their heals and exploring). Applejack happened to wander into a spot where he was framed by trees but I could still get a shot.

The lighting was kinda funky to work with. Every time I tried to get a clearer shot, or to get a shot with him bigger it would overexpose and washout. Bummer that this was the best I got, but still my first pic at the new place... and its got a pony in it :)

My husband has a sweet ass ;) 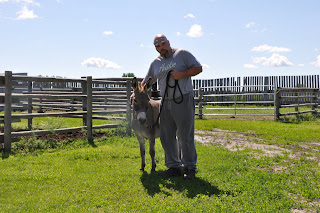 No he's not named after a much more well known donkey named George. Or even after my father-in-law (although that is a humorous coincidence lol). George came with his name and he knows it.
Pie has wanted a donkey for some time now. In fact it was one of the first things he mentioned wanting when we started looking for our acreage 4 years ago.
When we knew we were getting our place I started the search. We wanted a small to average size, healthy, friendly donkey.
I was having no luck at all when I got a couple good leads. A couple sold and before I had the chance to follow up the others I had a friend ask me if we were still looking for a donkey. Pie was right there, but he hadn't heard her thank goodness, so I asked her if I could text her about it later. Long story short it turns out that H was moving and could take her horses but wasn't able to keep her donkey. She knew we'd give him a good home so if we wanted him she would GIVE him to us.
(yup that's right, free... considering most of the ones I was able to find were in the $500-600+ range that was a heckuva deal!)
So a few days before his July 22nd b-day (on July 17th, my l'il sis's b-day actually) I told Pie that I had to go help H with a horse that I was going to take care of while she was out of town.
Yes I lied, shamelessly.
I came back a short while later with the horse trailer and Pie happened to be out at his shop. He looked at the horse trailer and asked what was going on.
Again I lied. "We decided it would just be easier for me to bring him here. But you've GOT to see this horse! Can you help me unload him?"
Pie opened the trailer door and there was George, facing him. Oh how I wish I had gotten a picture of that moment! I didn't have the camera at hand though in case I needed to help with the unloading. H had warned me that sometimes donkeys take awhile to warm up to people so not to be offended if George was a bit standoffish at first.
Pie looked back and forth from me to George and then exclaimed "You got a donkey!?!"
"No, YOU'VE got a donkey... Happy Birthday!" I told him. 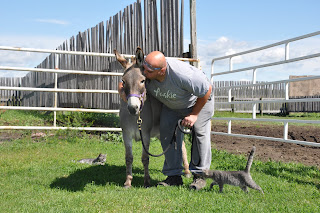 George has since settled in fine and is an accepted member of the herd. He also is very friendly and affectionate towards both Pie and I. And we're pretty proud of our cute little ass lol.
And I'm pretty darn proud that for once I was able to totally pull one over on Pie, he admits he had NO clue that I had found him his donkey! :)

Its the beginning of August already! Did you know that? Did you see it coming? Cuz it kinda snuck up on me lol
This week is our Provincial Finals for barrel racing. Kinda weird this year, its here in Saskatoon so Kimfer & I are hauling our horses in for their runs and taking them home at night. Costs a bit more than renting a stall but the horses are way happier.
I'm only taking Voodoo this year. Applejack had REALLY sore feet & I couldn't ride him for about a month. Didn't feel it was fair to him to bring him so I vetted him out.
This is my first time having Voodoo at something "big" like this so fingers crossed!
We brought our horses in last night for the open riding. Pretty glad we did. This setup is nothing like any of the other arenas we've ran in for finals.
Kimfer & I BOTH forgot our video cameras today. Hopefully one of us will remember tomorrow.
at August 04, 2010 10 comments: