I need some sleep!

We're running like crazy here. Finishing up the repairs/touchups & cleaning to get our house in the city sold.
Trying to get horses in shape for Provincial Finals.
Trying to get unpacked in the new place.
Oh and of course work and the usual stuff.
On top of all that I got my birthday present a few weeks ago...
(please forgive the quality of the pics, they're from my cell phone. And please ignore the ugly brown & white blanket lol)
Meet Tucker: 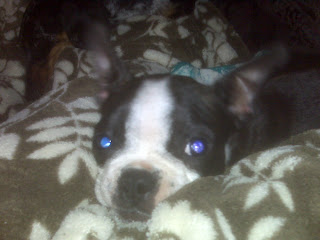 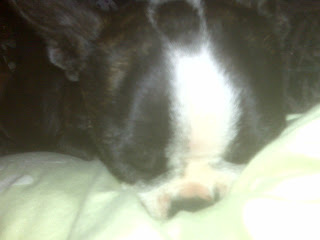 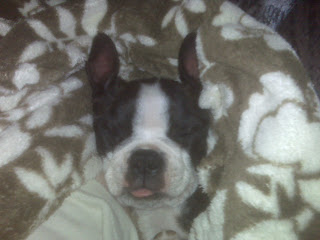 Tucker may be getting some sleep but the last couple weeks he's been keeping me up at night. Good thing he's cute! lol
at July 26, 2010 17 comments:

Email ThisBlogThis!Share to TwitterShare to FacebookShare to Pinterest
Labels: Tucker

For want of a camera cord...

I'd have a bunch of great pics to show you guys but I can NOT find my camera cord. Yup, the one that downloads all my photos to the computer. THAT camera cord.
Keeping a camera on me or nearby and handy is still a habit I'm trying to get into. I really need to try harder 'cause I've missed some pretty nice photo ops. Like Olive & Ethel playing in the trees. Like the two fawns drinking out of the puddle in my front yard.
Like the dogs lookin' cute. And of course the ponies lookin' cute.
In the meantime I'm unpacking.
Yes STILL. I try to work on it some everyday but I do have work to go to, horses to take care of, laundry and housework.
Okay okay okay so I should be unpacked by now. I know. But honestly my "free" time to unpack is limited.
I am trying to get it done however, I need my camera cord ya know! lol
at July 11, 2010 11 comments:

Email ThisBlogThis!Share to TwitterShare to FacebookShare to Pinterest
Labels: moving

I haven't been able to make it to any of our jackpots until recently. And the funny thing was I hadn't been missing barrel racing at all.
Sure I'd missed some of the people I see at jackpots. But the actual being at a jackpot, not so much.
However time does creep (or fly!) and the cutoff date to qualify for finals is approaching. Now that's the catch, I hadn't missed barrel racing or jackpots but I did still want to go to finals. lol
Due to our absolutely freakish weather in Saskatchewan this spring/summer the Provincial board dropped the required number of jackpots from 6 to 4 (that's per horse/rider team).
Also they are allowing "qualifier only" jackpots. These are jackpots where the barrels are set up anywhere possible and the only requirement is that you at least walk your horse around the "pattern". The pattern does not have to be regulation. 3 barrels set up in the cloverleaf pattern and you're good.
so last Sunday I took both boys to Hoovers and walked them through the pattern twice (it was a "double header" lol) paid the token entry and was on my way.
Then Monday I had a double header here. And it was an honest to goodness jackpot. My arena was dry - actually the ground was pretty dang good! Not often you hear no complaints about ground and actually get some compliments, at least not from barrel racers lol
I ran both the boys, and I was nervous. I have done NO barrel work of any kind with them, in fact I haven't even run barrels since mini finals last fall! (that's about 9 months ago)
Applejack was up first and he ran into the arena SO good. He walked calmly but alertly up to the gate and as soon as I moved my hands forward he flew to 1st barrel. His 2nd was probably the best we've had, traditionally our "trouble barrel". He didn't blow out wide, but then again I got my hand back on the rein and in position to keep him in line for 3rd. The only not so good spot in our run was 3rd. He kinda rainbowed it, too wide in and too wide out. But it was still a really good run.
And the timer failed.
On his rerun everything was working again and this time we didn't rainbow 3rd. He did get really low on 3rd, which isn't his normal turning style so for a second I thought we were slipping and going to fall.
Voodoo's first run really impressed me too. He walked to the gate nicely, a little jiggy but not bad and just like Applejack when I put my hands forward he just RAN to 1st.
His pattern was much better too. He seems to get it into his head that HE knows what to do and I should just sit there and let him do it his way. Which unfortunately isn't quite the case lol
He was much more responsive and kept his position better, and again I just rode better. Funny how that works ;)
My jackpot was a double header and again both boys worked really good for the 2nd jackpot. This is probably the best they've worked so I was really happy even if I didn't place. (actually Applejack got 3D 4th in the second jackpot)
Then on Thursday we spent Canada Day barrel racing at a fundraiser for our club. I only took Voodoo, Applejack was a bit sore (he seems ok now) Again Voodoo was working really nice. I had to leave to get ready for work before payout was done but I think I placed 4th in the 3D again (and I think it may be V's first time winning money!)
at July 03, 2010 8 comments: