See my header pic up there?  That was taken in early December 2011.  This pic below, that was taken this past Saturday... so about a month later.  Other than that big shadow at this end of the hayfield it looks pretty much the same.  Which is bad!  Snow, snow, wherefore art thou snow?! 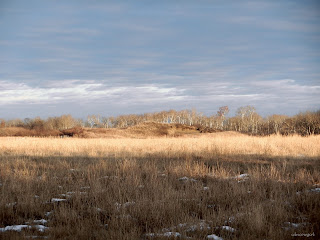 Around here snow is important.  It insulates plants & roots and contributes to our spring moisture.
Sure the city people are happy, they're not shovelling or dealing with crappy roads.  But will they be happy if we get a lot of extra rain this spring & summer to make up for no snow this winter?  NO.  And its not like that's a guaranteed trade off anyway.
Whenever they give me grief for missing the snow and say we don't need it I always say "Well, do you like to eat?  Because the farmers need it!"
I know not every area gets lots of snow (or any snow) for the winter, but for the places that do (like here) this is not a good sign.  Compare those above pics to this one below, taken early November 2011: 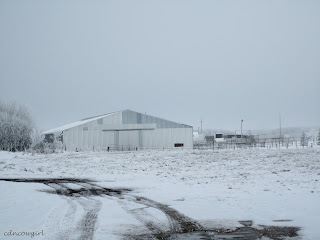 *just a random shot towards the neighbour's arena
the hayfield is off to the right of where I'm standing to take this*
Not a lot of snow, but its there and more came later.
At the rate this winter is going I'm getting concerned about my pasture & hayfield for this year.
at January 09, 2012