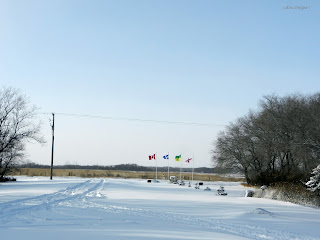 What's that?  Snow?!  Yay it snowed!!  Saturday night we finally got some of the white stuff.  Unfortunately it also brought absolutely FRIGID temperatures with it.
We've been so spoiled with mild temperatures that even our regular seasonal temps would seem really cold.  So instead Mother Nature is blasting us with extra cold temperatures.  I kid you not.  Yesterday the temps were in the -30 to -40 range (with the windchill it was almost -50!).  Keep in mind those are all Celsius.

(so -22 to -40F, windchill -58F)
Tuesday night (very early Wednesday AM) I let the dogs out for their final potty before I went to bed.  I picked Walter up from where he had curled up to sleep, opened the door so Tucker, Comet & Misty could go out, set Walter outside the door where he promptly fell over.
Seriously :o  Poor Walter!  That cold was a bit of a shock... probably extra so because he'd been curled up on the dog bed in front of the pellet stove (yup, I felt bad)
He got back on his feet, pee'd and came in and tossed me a look that clearly said "what the HELL were you thinking woman!"
I will gladly take the snow, I just think this extreme cold is a little cruel.  To try to take my mind off it I admire the snow and take pictures that amuse me, like this one... I think it looks like Mini Wheats for a giant 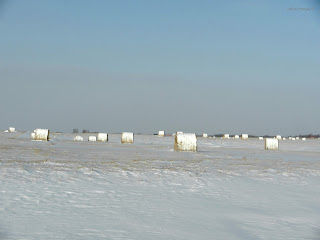 Email ThisBlogThis!Share to TwitterShare to FacebookShare to Pinterest
Labels: Winter/snow