We jokingly call our place "The Ranch", at 74 acres it doesn't really qualify.  Not to mention the fact that we don't make a living off it or really raise anything, although we DO have the cows now lol

I've told you guys a bit about our place and shown some pictures but today I thought I'd show you a picture of (almost) our whole place.  I took a pic of the aerial photo we have and added some labels (I'm pretty sure you can 'enbiggen' the pic if you click on it, if not let me know)
In black around the outside I've added directional letters for you guys. (E, W, N, S) 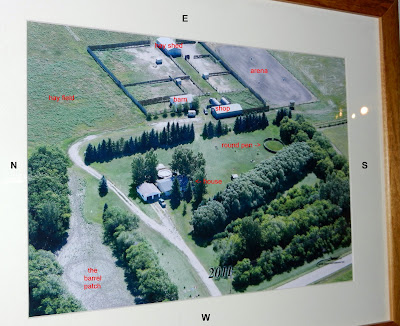 There are a few things not labelled in the pic that I should mention.
Between the hay field & arena and barn & hay barn are the pens.
To the East of the pen beside the hay barn is a small pasture then further East of that is the large pasture (which also has the track & Cessa's grave), to the South of the arena is the mid-sized pasture that is also used for parking during horse events (hence all the tracks in it, this pic was taken the day after I hosted a jackpot)
To the North of us is Neighbour Tom and his indoor arena.  If you go across the hayfield there is a gate between his place & ours, handy!
There is a mixture of trees on our place, but in the trees to the South of the driveway is a little Saskatoon berry orchard, pretty popular with those that like the berries.
So there you have it, a closer look at our place... I just won't give you the alarm code to the house & outbuildings ;)
at January 03, 2012

Email ThisBlogThis!Share to TwitterShare to FacebookShare to Pinterest
Labels: country living, the ranch