Meant to do this sooner!

Some of you may recall (or perhaps not) that last year I flew out to Halifax because my dad was having a kidney transplant. I was talking to him today (he's doing great) and I realized I hadn't shared some stuff that I was meaning to. So without further delay...
My dad (on left) and Uncle David. We were just leaving the hotel to walk over to the hospital. (yes it was that close) The last pic where everyone has all of their original parts: 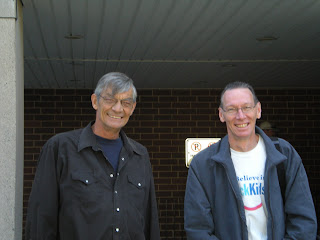 looking happy but nervous
The staff in Halifax were terrific. Really until Pie was hospitalized this summer I haven't had too great of a review to give our local medical community, so I was totally blown away by how wonderful they were! Unfortunately dad did suffer a rather strange side effect after the kidney transplant: 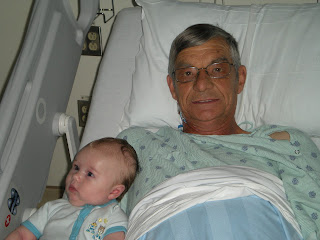 did someone confuse the transplant area with labour & delivery??
Actually that is a proud grandpa with his first grandson, my sis's little guy Lucas. (about 2 1/2 months here).
Dad and Uncle D did great. Both were released much sooner than expected and dad even went back to work earlier than estimated, although with a few changes. Its about time the old man started to slow down! lol
Since we started with the 'before' pic we should end with an 'after'. Here they are again, with a bit of parts scrambling! ;) 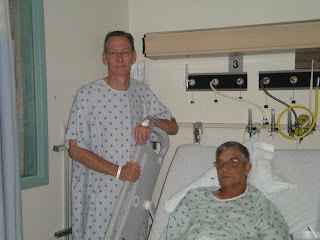