We had a pretty wicked storm roll through this area Tuesday.  Before I left work I found out we had tornado warnings and when I left they added a thunderstorm warning.  I saw lightening flashing all around as I drove home.  I stopped on the road in front of our place and took this picture of the sky to the west of us. 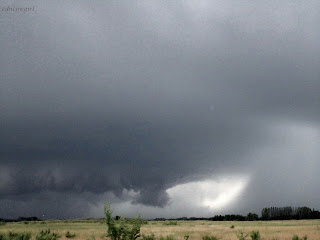 I quickly zipped down to the barnyard to check on things there.  The horses were all in the pasture by the arena.  You can see the dark clouds are much higher in the sky and the rest of the sky is fairly light.  This direction is basically south-east of the house and that dark mass kinda spread from the west over the house.  The more east you looked the lighter the sky was. 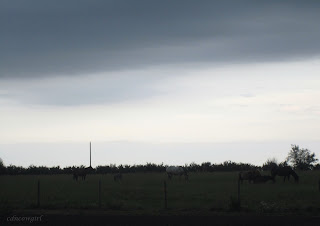 I hadn't been in the house too long when the storm hit.  Lightening would flash and thunder would boom immediately after.  During the worst of it the wind and rain was so bad that I couldn't see the road when I looked out the front door nor the trees and barn light from the backdoor.  I could see the flower pots that are on the side of the house swinging back and forth, the flagpole by the dog kennel was being pushed by the wind so that it was leaning over the kennel.  There was about 10-15 minutes where the thunder boomed continuously.
During a lull I went out to check on things.  There were a lot of branches blown down and scattered around the yard.  The biggest being as thick around as my wrist and about 3 feet long.  LOTS of water, we're pretty sandy and most of that water is still draining so we've got puddles everywhere, which means it rained a LOT.
When we cleaned up Wednesday we found a small tree down and a pine branch about 5 feet long that Pie could barely lift.
Now look at this... see that tarp building on the right, the trailer and the big empty spot?  Well there had been another tarp building there... 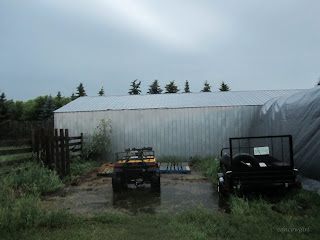 You can see the dents on the roof of the shop where the building hit. 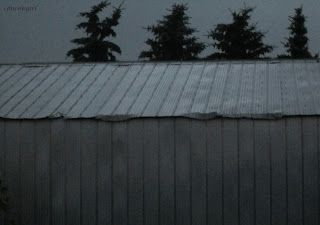 And here it is on the other side of the shop.  Yikes. It pretty much lifted up and over. 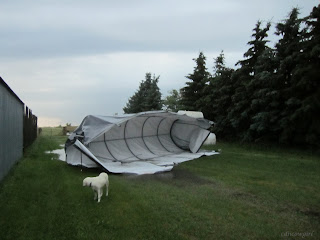 I took this second picture of that building the next morning.  As you can see the storm picked back up and there was enough wind to move it around some more. 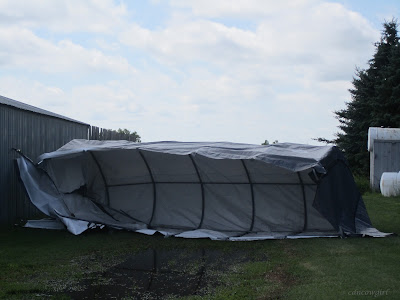 And this is my brand new, used once, announcer's stand. And yes that is its roof to the right. 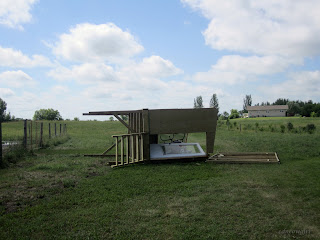 Now remember that I said the horses were in the arena pasture?  Yeah so during the lull of the storm I went and tracked down the herd, I didn't want to risk anyone stepping on a nail from that roof and we all know how curious ponies are and how they'd "investigate" once things settle down.
I haltered Applejack & Voodoo (because he's The Boss) and led them back to the pens with everyone else trailing behind.  Of course that was when the lull started to end and the storm picked back up.  Got everyone through the pens and into another pasture and back to the house, by which time I was soaked right through my rain jacket.
The little wire fence and bird netting around my square foot garden were twisted but easily fixed.  For once being a procrastinator paid off, my plants were small enough to survive without damage lol 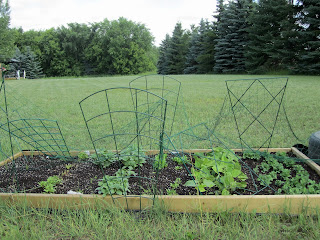 We got off lucky, I'm very grateful.  A friend a couple miles over was teaching a lesson and got a call to "Get the F out of the arena"  He looked out the doors and saw a couple small twisters tearing through the pasture so he turned all the horses loose and ran for it.
Another friend had the wind and rain blow out the seals on her south facing windows (kitchen and living room) and her front door blew open, yes it was locked, good thing she was home.
Another friend had her sewage back up because so much water got into her septic it just couldn't keep up.
A semi trailer in the town 10 minutes away blew over as did several large trees.  There were also some other small buildings destroyed and lots of crops damaged/destroyed.
We're all lucky and grateful, things could have been a LOT worse.