Laura over at littlekeebler tagged me to play "Book Tag". I've always loved books so I thought this was a great game.

The rules of BT are as follows:

1)Grab the nearest book.
2)Open the book to page 56.
3)Find the fifth sentence.
4)Post the text of the next two to five sentences.
5)Don't dig for your favorite book, the cool book or the intellectual one,Pick the Closest.
6)Tag five people to do the same.

I'm actually reading about 3 books right now, so depending on where I had been when I got this the book could have been "Martha Josey's Running to Win" or "Rhett Butler's People" (or even my Greek homework... now that would have been interesting! lol)
But the book I was closest to (as per the rules) sits on my desk beside my computer. I flip through it while waiting for things to load or just to soak in some beauty. The book is... 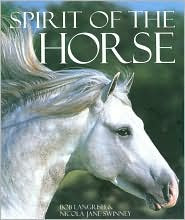 Spirit of the Horse by Bob Langrish and Nicola Jane Swinney.
Filled with the breathtakingly beautiful equine pics that BL is famous for it also has some breed/horse information that is not so common place.
Following the rules, I flipped to page 56, and it was a stunning picture of a grey (the white kind of grey) Arabian mare and her darker grey foal. So I looked at the facing page (57) and found the 5th sentence, which read:
"Like the beautiful Arabians shown here, the Seglawi was most commonly grey, with more white markings than other strains."
To continue on (remember, the rules!) it reads:
"In contrast, the Hamdani horse could be considered plain - if that description could ever apply to the Arabian - with an athletic build and bigger bones. He lacked the pronounced jibbah and has a straigher profile and neck. He was a bigger model, standing at about 15.2HH.
The Hadban was a smaller version, standing under 15HH. Although he had a markedly muscular build and bigger bone, he was known for his gentle and tractable nature."

Now to continue this game I tag:

Stacey Kimmel-Smith at Behind the Bit

and ezra pandora at The Wacky and Wondrous World of Ezra

Leah I've known for a little while now, but c'mon she has "tagz" in her blog name, I HAD to choose her! lol
The other bloggers are all fairly new to me, which is why I chose them.

Email ThisBlogThis!Share to TwitterShare to FacebookShare to Pinterest
Labels: Meme/tag