First off, my "weekend" starts on Sunday as that is my first day off after working. Secondly, even though it is "officially" verrrry early Monday morning when I say 'today' I am referring to Sunday (I haven't gone to bed yet so it can't be tomorrow! lol)

So this boy, Applejack, has been a super boy these past few days: 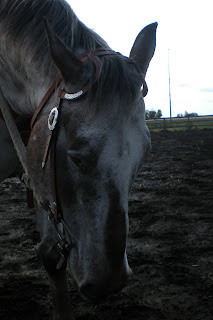 I took him for a short ride Saturday. We're trying to figure out what bit we want to use for this new team sorting thing we're doing. The snaffle I used last weekend was okay but he just wasn't as quick to respond as I wanted. I felt like there were times where I was hauling him around in the turns.
Yesterday (Saturday) I rode in a jointed mouthpiece with short shanks. The arena was muddy and it looked slick so I rode him in one of the pastures. We mainly walked and jogged and took it pretty easy as I didn't want to tear up the pasture.
It was such a nice ride though! He was so responsive that it was like I just had to think about what I wanted and he did it! :) We would be jogging along and I'd think to myself that I wanted him to speed up a bit and before I could consciously cue he would speed up a tad. I'd think of asking him to slow down and bam he'd slow down. I loooove those kinds of rides. Also, I didn't have to use any rein to stop him, stops were all off seat and voice commands. We were just so in tune that everything seemed to click. I even tried some turns on the haunches and I think if I were a better rider I'd have been able to get a spin.

So then on to today. Pie finally got a real day off. He hasn't had one in a few months (oh the joy of having your own business). Last night we talked about what we wanted to do for the day and decided to go ride, yay! Pie hasn't ridden in months, and, well... I have kinda stolen his horse for barrels. :o
I was kinda concerned, Applejack was being an awesome beginner/lesson horse for Pie and I hoped putting him on barrels hadn't got him a bit hot or quick. So we saddled up in the barn and then Pie went to walk Applejack in the arena while I bridled Cessa and talked to Kimfer.
Kimfer showed me the bruise on her calf from when she fell off the truck loading bales (ouch!!) I told her that was a pretty spectacular bruise and she should show Pie. She asked if he was riding already and I said no, he was supposed to be walking his horse so he could tighten the saddle and besides he wasn't supposed to get on before I got out there.
Well we walk outside and what do we see: 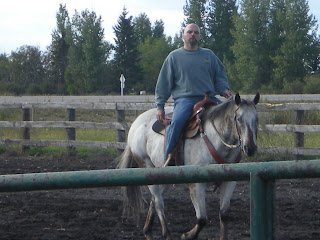 Yup, Pie and Applejack just tooling around the arena all comfy like its an everyday thing! Pie hasn't had a lot of experience riding yet, his lessons kinda went bust when I fired AmanDUH (oh geez yes, SHE had been teaching him!) I get kinda protective of him and worry too much that he'll get hurt. (I'm worse than a parent! lol) Part of it that Pie isn't really scared because he hasn't had a bad experience yet. I know it will come eventually, it does to all of us that ride any amount. I just want it to be an experience that he can deal with and one that doesn't make him say "forget this!"
Pie was very happy after our rides and glad he'd decided to come out. He even rode longer than I did!! Cessa feels like her mind and heart have more to give than her poor body right now. :( She hasn't been ridden much and she's had some minor leg issues this year. The vet says to ride her but take it slow for now so we walked and did a tiny bit of trotting. I could feel her wanting to go faster but I didn't want to risk it. I was very surprised when I told Pie that Cessa should be put up for the day and he said he'd keep riding for a bit!
While Pie finished off his ride I put Cessa's magnetic boots on and untacked. Then I went out and snapped a few pics of my boys. When Pie was done I got on and took Applejack for a few laps at a lope and then we cooled him out, untacked and grained the ponies and turned them back out.
Here are my boys posing and looking serious: 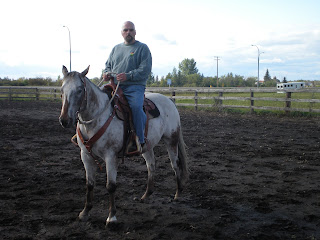 Tonight Pie and I just chilled and watched some TV, it was a nice day together. I'm glad he finally had a day off and it was lowkey and relaxing for him.
at September 08, 2008