Team sorting was, again, tons of fun. The weather was nicer this time, hopefully next weekend it will be nice too! (last team sorting of the year).
At these sortings teams are made by draw. You get four teams with two go's so you sort eight times total. There is a short lunch break between the two go's. I had a huge wait between my first team and my second team so after the lunch break I took advantage of that and snapped some pics.
Of course I put the first three pics out of order! The 1st pic (which I wanted 3rd) is below: 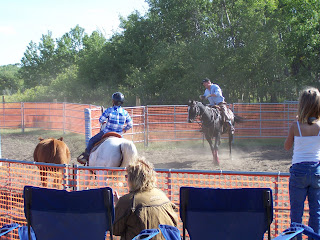 That is young Mark (he's 8) on an awesome little grey Arab sorting with Doug. Doug and his wife Bev own the acreage that hosts the team sorting. Really nice people. Doug's black gelding is Fred. He's 8 and Doug's had him since he was a 2 year old. They have a great bond, nice to see a horse that had been treated so badly find a home and get to live 'the good life'. (He had been very abused before Doug got him and his body has a few marks to show for it :( )
These next two pics were supposed to be at the top of the post! Kimfer's Aunt Jacquie took them at our first team sorting a couple weeks ago. Can you guess who's in these pics? 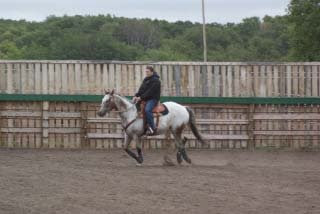 Yup that's me and Applejack in the big arena warming up. Or trying to... dang it was chilly that day!!! I had on a long sleeve T-shirt, a big fleece hoodie AND my heavier fall jacket. I really wish I had remembered my gloves To make things even chillier, a light misty rain fell for about half an hour part way through the sorting.... brrrr.

Below I believe I was getting him ready to try some bending/flexing. Can't really remember! (this was two weeks ago after all. lol)

BTW I really like how Doug and Bev have the orange snow fence attatched to open rails in the arena and sorting pens. Makes the fence so much more visible for the animals. 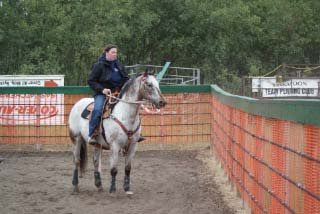 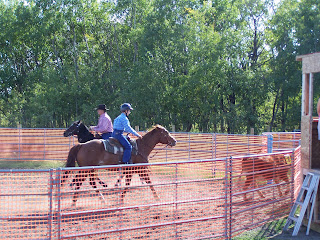 Back to pics from yesterday! See how nice and sunny it is :) Above is Connor and Norbert. Connor is 12 and Mark's brother. He's a nice kid but his sorrel can get a bit aggressive with the cows, see those pinned ears! He'll even bite them if he's close enough (have to watch he doesn't get called for excessive roughing!) Good teamwork here, Connor is clear with his cow and Norbert is setting out for the next one. 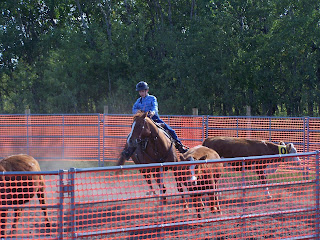 Here Connor's locked in on his cow and his horse is giving the 'stink eye' to the one on his left.
"Back off cow! Don't you dare try to get through that gate over there!!" lol
Its hilarious watching Connor sort, he growls and yells at those cows! 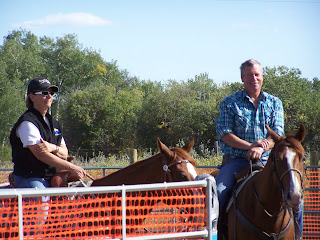 Talk about a stacked team! Brenda and Ace. Ace is Holly's husband, they're the ones that told Kimfer and I about sorting. Brenda is Holly's good friend, in fact Brenda & Holly are kinda a slightly older Kimfer & Lisa. Brenda, Holly & Ace are all very good horsemen. Brenda's on Yogi and Ace is on Dude, both awesome horses. 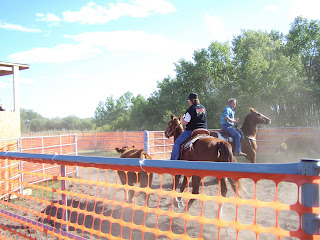 Brenda bringing in her cow while Ace guards a charge on the gate, hope he sees that sneaky #6 on his left while dealing with what's on his right! 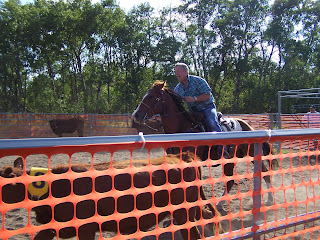 Last night on my way home after dropping off my horse and tack I noticed how gorgeous the moon was. So I pulled over on the shoulder of the highway and snapped a few pics. Here's the best one: 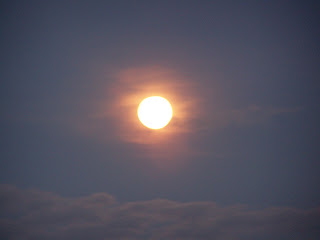 *photos featuring myself were taken by Jacquie Fehr*
at September 15, 2008