Instead of boring you all with a weather report (let's just sum it up as freaking cold) I thought I'd share a little Christmas story with you.
Its a true story, it happened when I was about 4 (maybe 5), and while funny now it wasn't at the time. Basically, I ruined Christmas. (its okay, like I said its funny now)
Before I start I should mention that this story is partially my own memories and partially stuff that's been filled in by my parents over the years. At the time I was either an only child (mom would have been preggers with my sis) or my sister was just a teeny baby.
Like a lot of little girls I was horse crazy. Unlike a lot of little girls it never wore off... but you all know that! I wouldn't be surprised if "horse" or "pony" was one of my first words.
So that year, like many many MANY more to come, the main thing on my list to Santa was a pony! (or horse, really to my 4 or 5 year old mind they were pretty much interchangeable).
I didn't care what kind or what colour... I just wanted a pony of my own! 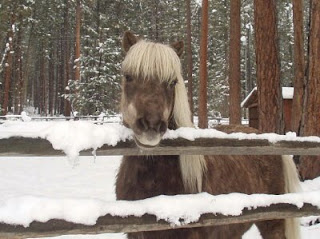 I am originally from New Brunswick. There my parents wouldn't have been able to tell me "No. Where would it live?" Because Grampie had a farm and of course it would live there! But now we were living in Saskatchewan. In a city. So my parents always had that excuse ready.
Of course to my toddler mind our back yard was H-U-G-E. The pony could live there!
"What would it eat?" my parents would always ask.
Well, duh, grass. But then I was reminded of the snow and wintertime. But I had an answer ready!
The pony could eat these: 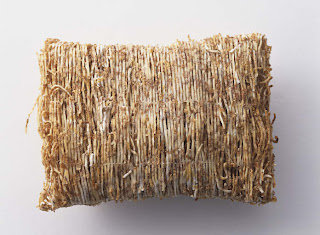 To my little eyes Shredded Wheat were big. And almost like miniature bales of hay. Surely Daddy would let me give his breakfast cereal to the pony! 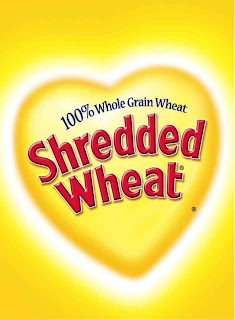 But no. That plan was always rejected... dang it.
That never stopped me from asking. So yes here we were... Christmas.
I'd asked for my pony.
I'd tried soooo hard to be good.
I made sure Santa, mom, dad, well everybody, knew that what I wanted more than anything was a pony.
Christmas morning my mom and dad came to wake me up... all excited.
(okay this part makes me feel guilty to this day. How excited could they have been that they got the *perfect* gift for their little girl? I mean really, they were up before me and came to get ME up!)
I remember very clearly my dad telling me "Come see what Santa brought you! He brought you a horse!"
I also remember running out to the Christmas tree.
Bursting into tears and running back to my room.
I threw myself on my bed and sobbed hysterically.
They were NOT happy tears.
Why? Well because...

...as I choked out to my parents... THAT wasn't a horse. THAT was a TOY!
My poor folks. They thought they had got me the next best thing to a horse, they had gotten me a rocking horse (the spring style, although not quite the one in the picture it was very similar)
Okay so my dad's choice of words may not have been quite right, but I still feel a bit guilty when I think of that Christmas.
For the record, after I calmed down that DID become one of my favorite toys EVER.

*I did not take/create any of the above images*