Thursday was vet day, The Day, the day the colts were scheduled for brain surgery.  I was also getting Cessa's teeth checked and Voodoo & Applejack were getting their wiener holders cleaned (after all if the vet's already there...)
This is the face of a brand new gelding lol 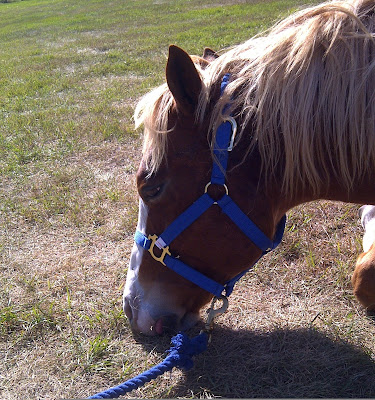 Doc L decided we'd start with the colts.  I told her that while they are both halter broke and will tie, Odin is a bit stubborn and doesn't lead too well.  In fact if he decides not to cooperate you kinda wonder if he was a mule in a former life.
Sure enough he decided no way in hell was he leading away from everyone else and his safe zone.  Doc had to smack him on the butt and encourage him along while I led.  Finally he grudgingly moved along... maybe if he knew what was in store he would have refused a bit more lol
His gelding took a bit longer than usual.  His 'bits' were on the smaller side and even though he was drugged he kept pulling them out of Doc's grasp.  He made her work for it but eventually she got them both and it was a successful little surgery.  I warned her he was stubborn ;)
Tavi went down like a cheap drunk, the drugs hit him harder than they hit Odin.  He's got a couple hundred pounds on Odin but he was much easier to get down and to geld.
Next up was teeth.  My neighbour Jo brought her Paint gelding and mini mare to get their teeth looked at (which was nice because then we split the call fee) :)
After they were done Doc looked at Cessa and just as I thought there was not much to work with there.  Good news is there were no sharp edges, so no dentist for Cessa.
Then Voodoo and Applejack got their sheaths cleaned.  I will confess that I have NEVER cleaned a sheath.  Doc and I talked about it and part of it is that I'm scared.  I had a gelding that even when really drugged would light up and fire at you if you dared to approach his man bits.
Also since I've never done it I worry about not rinsing enough and leaving soap/cleaner up there.  That can't be a good thing.  Plus it is kinda gross lol
Voodoo & Applejack are both really good to clean.  NO drugs at all, they just stand there and look kinda mildly offended/embarrassed and like they're thinking "please just finish"
So Doc made me stick my hand up there after she cleaned Voodoo.  Just so I'd know what a normal, clean sheath feels like.
Then before she cleaned Applejack she made me feel what a grungy one feels like.  I have to admit that I went "oh yuck!"  She laughed and said, "I guess you'll keep paying me to do that"
To be honest it just wasn't quite what I was expecting.  I was expecting it to feel more like dirt.  It did not.
Both colts seem to be healing up well.  They were bright eyed and moseying around today in their pen.
There was a nice surprise too, my bill was about $300-400 less than I thought it would be.  I had heard that a couple years ago Doc L was charging over $200 to geld so I was thinking it would be more than that now.  Instead it was $150 plus the drugs (which ended up being $30some each, so both boys were less than $190 each)
at September 17, 2011