A couple posts ago I mentioned that our little Echo has been earning his keep.  Since the day we got him I've heard him bark at "things" every night.  I think that usually it was deer in the bush or something innocent like that.
One night I heard him REALLY bark.  He sounded like he meant business.  Then I heard the coyotes start singing.  And barking.  And howling.
Echo kept up his "tough guy" barking and growling and after awhile the coyotes moved on.
We don't get coyotes around very much lately but when we do Echo sure puts on his game face and goes to work.  Some nights its more work than others.
Not only does he keep the coyotes away but he's been keeping other varmints away too.  A week or so ago I was getting ready to go out and do the horses final feed (around 2:15am, remember I don't exactly have "normal" hours) when I could hear Echo growling and barking just outside the back door.
I kept the other dogs in the house and went out on the deck with a flashlight.  I couldn't quite tell what he had at first but I knew I didn't want it in my back yard!
For about 10 minutes I watched him pounce, jump and dance around this thing... about 10 feet from the deck, right where my dogs always run around.
I went back in the house and put on jeans, boots and a hoodie (thought they'd be a bit more appropriate than the shorts, flip flops & tank top I had been wearing) and managed to keep Tucker in the house while I let Comet & Misty out with me.
Echo & Thing were still by the deck so I sent Misty & Comet over to check things out.  It jumped at Misty and she came back to me.  At first I thought she was just a chicken but I noticed after that she kept herself between me & It no matter where It was.
Comet would go check things out then wander away, then go back.  Gradually It moved across the yard, over the driveway and across the barrel patch, by then Comet was much more interested in working with Echo.  I noticed that It wasn't really trying to get away anymore.  I called the dogs off a few times and It would hold its ground when they came to me.  It was no longer in fight or flight mode, It just wanted to fight.
Echo & Comet got It positioned between them and kept it there, It would make a few little jumps but no big moves.  Meanwhile the dogs would bark and snarl, it seemed like they were trying to egg it on.  Eventually that worked and It made a BIG jump at Echo.  Comet darted in, snatched it from behind and gave it a couple good shakes.  Yep Comet, the dog that has never shown any aggression to any other living thing, dealt the killing blow.
When he dropped it the feet twitched a bit and then Echo grabbed it and shook.  When he set it down I went over, with a big metal rake, and gave it a poke or two to make sure it was dead.  Thankfully it was.
Now what to do?  I didn't want them to eat it or drag it off.  I checked the time, saw  it was around 3 and realized Pie would be home soon so I stood guard while telling the dogs how good they were. A few minutes later he pulled up to the garage and I called to him to bring a shovel to dispose of it.  Then we got a good look at it and I snapped a couple cellphone pics, It ended up being a muskrat.  A good size one, probably close to Tucker's size.
I was SO glad that Echo was trying to get rid of it.  Something like that could have really hurt Tucker (or worse!)  I'm all for wildlife, just so long as they leave my critters alone. 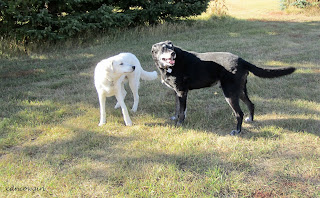 The odd couple, Comet doesn't usually like Echo so I was kinda surprised  they worked together so well.
Both dogs were none the worse for wear.  Echo managed to get by with no injuries and Comet had a small bite to the face (all the dogs are up to date on shots)  I took Comet in to Dr Lorrie Saturday morning to get the bite checked and he was fine, although he did seem to have a cocky strut ;)
at September 26, 2011