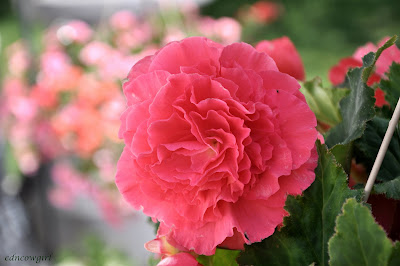 Sunday I hosted a double header barrel race at my place.  Time is ticking away to get the boys qualified for provincial finals so I decided to enter both of them.  The last time I had entered Voodoo was October 31st of last year, so he hadn't had any barrel work other than the Molly Powell clinic I had gone to this spring.  It was the first time running Applejack in ages, other than the few runs I took when LK was tuning him up for me this winter.
I have to admit, I was a pretty nervous about running Applejack... we're having saddle fit issues and I was worried he would buck.  I have a new saddle on order and have been borrowing Kimfer's Black Rhino for now.  He seems to be working in it pretty good and seems to fit so I may end up buying it yet.
However the Sunday before when we went to sorting he seemed to get humpy when I asked him to lope.  But as LK told me, I wasn't going to be loping the pattern lol
I made the decision to run Voodoo first, I wanted to get the jitters out of the way with the horse that didn't have me scared ;)  The runs weren't perfect but I have to say that I'm quite happy with how the boys worked.  Four runs and no barrels down!
Both horses entered the arena nicely, which was becoming a bit of an issue last year.  Voodoo went to the gate nicely, although with a bit more spring in his step than usual and rolled on when I let him go.  Applejack walked up so quietly that I was actually kinda worried that he wasn't feeling like it was "competition time" however both times he jumped into gear and ran as soon as I asked.
But best of all in the first jackpot both boys placed! :D  Applejack won the 3D, although I almost bit the dirt when he stopped.  He was running home so hard that he kinda ran through the bit when I asked him to stop.  My arena fence is made of page wire and I don't think he saw it or realized how close it was until he saw the banner on the gate and S.T.O.P.P.E.D. like now with his nose touching it!  The gate man jumped back and I popped over his shoulder, thank goodness I managed to stay on (thank you saddle horn!)  In the second jackpot we slowed down a touch and ended up 2 spots out of the money, I guess I didn't run him home as hard as I could have lol.  Voodoo placed 3rd in the 3D and I managed to get a bit more speed to bump up to the bottom of 2D in the second jackpot.  Neither one of them have had a lot of riding yet this year so I'm hoping we'll do even better once they're in shape!
I just want to give a quick Thank You to my momma and my friends Kimfer, Melly and BK for helping set up/tear down, announce and rake at the jackpot (and to Melly for warming up Applejack)
at June 09, 2011