Those of you that are on Facebook with me know that this past Saturday we lost one of our barn kitties, Ethel.
I have suspicions on what happened to her but nothing is certain.  We found her lifeless body in the colt pen with not a mark on her.
Tucker does torment the cats but the 2 females he tends to leave alone, they refuse to play with him.  The 2 males he plays with, and quite roughly, but the little dummies don't do anything about it.  In fact Oliver will come running to him for a wrestling match.  BUT the last time Tucker was anywhere near her she was alive.
Because of the lack of any visible injury and finding her in the colt pen what we guess happened is that she was kicked by a colt.
It sucked, even though I told myself she was a barn cat and it there was a chance it would happen one way or another.  It also sucks because she was our best mouser, even catching moles. 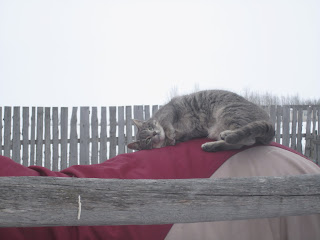