I remembered my camera!

Yesterday Kimfer & I hauled our horses to our friend Julie's place, about an hour from where our horses live. Julie and her man farm by Eagle Creek. Its nice because it feels like you're in the middle of nowhere but you are not actually that far from 'the city'.
We saddled up in the farmyard and rode to the river which at this time of year has some awesome 'beach' areas.
The ride to the river took not quite an hour. Below is the view from one pasture just before we start riding down toward the bank.
(you'll have to forgive the quality of the pics as they were all taken while mounted) 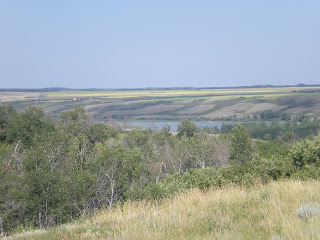 This is Julie (on her 3 yo) just before going down the last embankment to the beach: 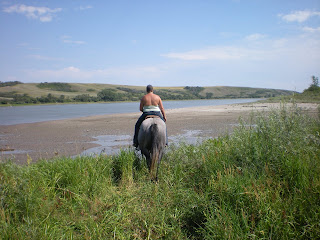 This is the view Applejack and I had at the same spot: 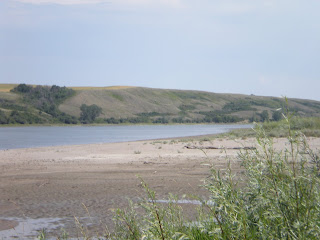 I got to fulfill a life long dream, galloping down a sandy beach and through the water at the beach's edge. Here are Kimfer & Julie doing the same (we were escorted by the farm dogs Roxy and Jeannie): 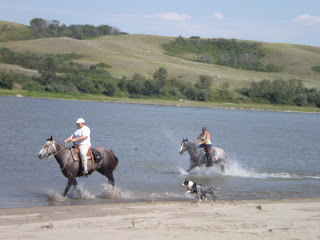 Applejack really seemed to enjoy playing in the water. He'd duck his head and splash at his face while walking in the river. I thought he was trying to drink so I stopped to give him a chance. He started pawing the water though and I didn't want to risk him trying to lay down so on we went.

He was a bit nervous about walking into the river at first so I just kept riding a little closer and then walking parallel. Then I'd ask him to move a bit closer until next thing you knew we were in! After that there was no hesitation. Walk, jog, lope... water or beach he was fine.

This picture does not do justice to the steepness of the slope we had to climb on the way 'home'. 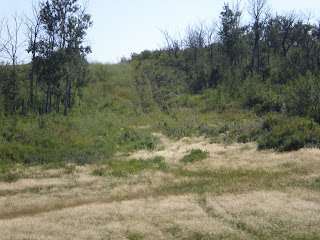 There was also a weird bee incident. There is a bush with some farmed bee hives that we had to pass. Julie has rode down to the river MANY times and never had a problem with the bees. She usually just rides on the road right past without any trouble. Yesterday we rode in the field b/c Julie's filly found the road too much on her tender feet. So there was the bush with the hives on one side of the road and the field we were in on the other side. And we got attacked! Kimfer was stung 4 times (3 through her shirt and 1 behind her ear - THAT one really hurt she said) Julie could feel them dive bombing her ballcap and bouncing off. I was between K & J and although they didn't bother me I think they were bothering Applejack.

On the way home we rode as far away from the hives as we could without damaging the canola crop and galloped by. We could see hundreds of bees in the air and as we passed I could feel a few ricocheting off me. I think if we had gone slower I would've been stung.

It was really strange. Julie has never had that happen before and she's not sure why it did happen. Other than that though it was a SUPERB day!