I haven't really posted much lately... well there's been the Wordless Wednesday, Friday Funny, and Sunday Stills, but not a "real" post, a post talking about what's going on with things here.  Between being struck down with creeping crud and trying to work I haven't had a lot to say.
Pie had his appointment with the specialist on Tuesday.  We gave his history, he had some more tests done, then he got referred to 2 more specialists (ear/nose/throat and an allergist) as well as had more tests requested, another breathing test (it will be the 3rd), the CT (the one that still hasn't been done) and a sleep study.  He has been feeling a lot better lately and the specialist we saw said that his lungs sound good at this time.

Today was gorgeous, I had some "me time" free and I'm feeling much better so out the door I went!
Take a look at the pic below, can you tell what I did? 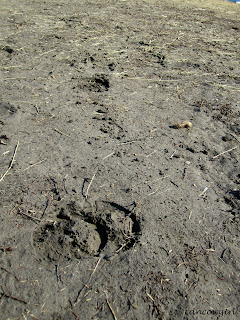 Those are Voodoo's footprints, I went for a ride!  Voodoo and Applejack were out in the pasture when I went out to get ready but moseyed in when I whistled.  I've left the gate from their pen to the sacrifice pasture open so they could go out there if they want to.  Lately they have been out there pawing the snow to the bits of grass poking through.  Maybe its a spring fever thing?  The colts are doing the same in their pen.  Even though everyone has nice bales of hay they're scrubbing around for grass lol.
That's knee deep snow the big guys trudge through to get out to the pasture: 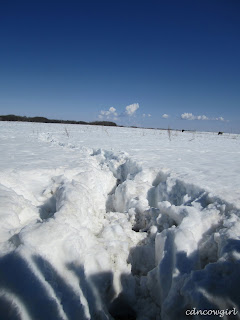 There's nowhere with good enough footing to ride here so I'm stuck ditch riding still.  The pastures are good enough to ride, I just can't get into them!  So down the road we went.  I was pretty impressed with my boy.  He's had most of the winter off and the only time he's been ridden off the yard here is to go down our driveway, down the teeny stretch of road to Tom's and down his driveway to the indoor so I wasn't too sure how he'd react.
When I swung up in the barnyard he was a bit antsy but once we headed down the driveway he settled down.  I kept it to a walk and it was sooo nice.  He just levelled out his neck and walked out with that nice, easy walk that swings your hips.
It was nice to be out on a ride, soaking up some spring sunshine.  The only noise was the creak of leather, the soft thud of Voodoo's hooves on the sandy edge of the road and the drone of our only company: 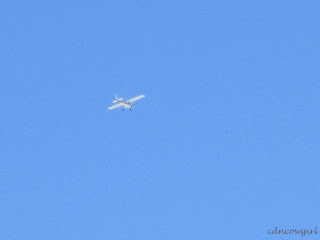 We didn't go very long, only about a half hour.  When I got back Voodoo rolled in his pen and then he and Applejack headed back out to the pasture: 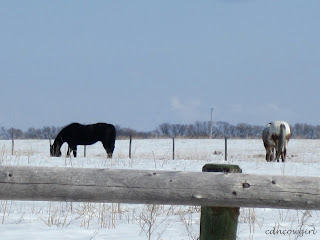 Cessa gets quite upset when the boys leave their pen.  You'd think she was the only one left instead of having 2 colts in the pen right next to her and Rootbeer and George in the pen directly across from her.  She picks at her food while they're gone and calls and CALLS. 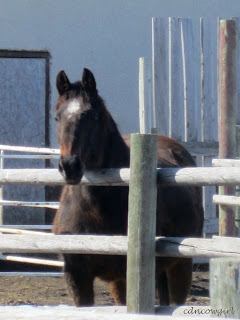 She's looking pretty good though, other than the scruffy spring coat :)

I'm going to be riding a lot more in the next while, I've signed up for 2 clinics between now and the end of May, a Molly Powell barrel clinic and a Dave Manning clinic... might take one of the colts to that for some groundwork.
at April 07, 2011