**warning some may consider the pictures below to be of a graphic nature**
edit to add - sorry for the poor quality of the pics, they were taken with my cell phone
In an ideal world our precious equine friends would never have bumps, scrapes or boo-boos. And wound care any time of year sucks... each season has certain advantages or drawbacks. But up here in the frozen north, dealing with wounds that need water in the winter is a big minus.
Last winter Kimfer and I were both at the barn and when I brought Cessa in we were greeted with a massively bloody leg.
The thing is, how much was frozen blood and how much was actual injury??
She was walking sound, but there was soooo much blood. Only one way to know, clean it up.
But how do you do that in below freezing temps? Get some warm clean water, rubber gloves, towels, a pan and the blow dryer: 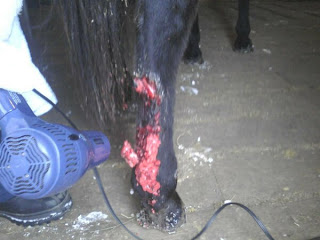 Thank goodness Cessa has had plenty of time with the blow dryer (winter tail washing) and doesn't give a darn about it. 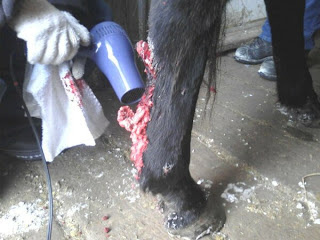 Slowly the frozen blood warms up enough to peel off. 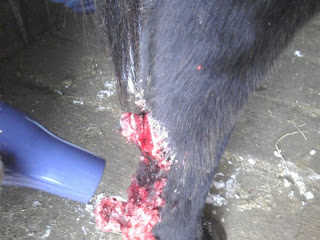 Frozen blood makes it look so much worse than it was. 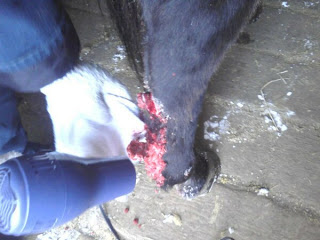 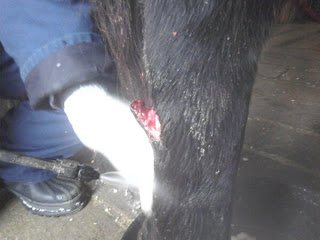 Trusty pump sprayer... no hoses could be used due to the cold. Fill the bottle with warm water and spray away. Actually has decent pressure for cleaning wounds.
Hard to see in this pic but we placed Cessa's hoof in a rubber feed pan so the barn floor wouldn't get water on it and turn into a big icy mess. 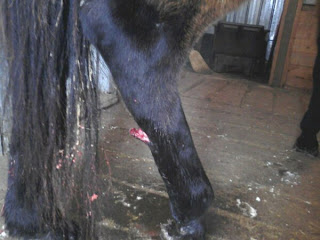 This cut, while not so nice, is the cause of that huge bloody mess. 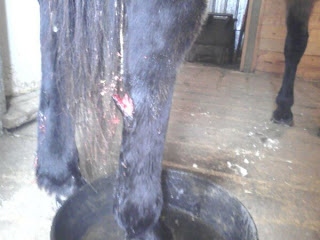 No idea what she cut herself on. I looked all over the feed pens and winter turnout and couldn't find a thing, not even a blood trail.
It obviously bled pretty good, but it was so cold out the blood was freezing as it came out. That's why it was so bloody and gory looking.
We cleaned it up as best we could and put some wound cream on it and bandaged it.
I talked to my vet and she said we could leave the bandage on for a few days at a time.
After awhile the healing seemed to stall so Dr.P came out and cut off that flap. She said leaving the flap on and pushing it down with the bandage was the right thing to do, it kinda acted as a natural bandage.
The tissue from the flap had died though and needed to be cut off. 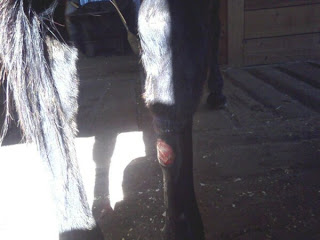 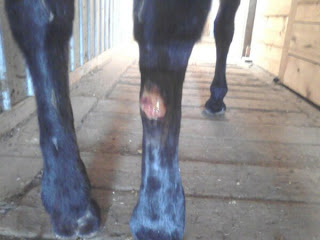 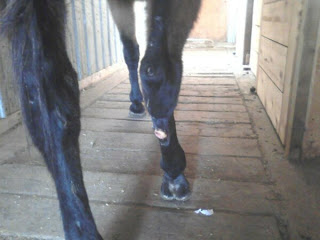 It healed very nicely... hair is still as black as the rest of her leg and there is just a tiny bit of thickening from scar tissue.
It would have been MUCH easier to take care of in the spring or summer though!
(but then you have to deal with flies...)