A Different Kind of Ride

Nobody correctly guessed the ride I took while out east soooo: 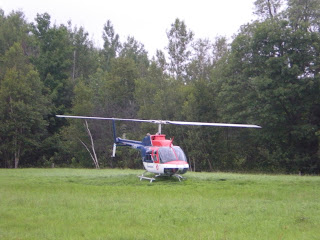 Yup, I got to ride in a helicopter!! Yes, it was my first time and it was awesome!

This is how it came about:
Auntie & Uncle told us that on Saturday there was going to be a helicopter landing in their field across the road from their house. This was a big deal, being a small town all sorts of gossip could start from this. Turns out that a very well off man had approached them asking if he'd be able to land in their field. It was his mom's birthday and he always tries to do something special. This year was her 80th and he had connections to give her a helicopter ride, he just needed a place to land.
Auntie & Uncle said sure thing. The day of the helicopter ride came and it was grey, foggy and yucky. Uncle and Bri gave up waiting for it when it was 20 minutes late. I gave up waiting somewhere around a half hour. I said "Watch, I'll go in to wash my hair and it'll come."
Sure enough that's what happened.
Drew (my cousin) and I got a good spot and got pics of the chopper landing and the birthday people getting on and flying off. They went for quite a few rides with different combo's of the birthday lady's family members.
(Drew has an awesome video where he tried to follow the chopper and it flew right over him... he followed until he kinda fell trying to bend backwards)
Now we were kinda bored, you can only watch it land and take off so many times. lol
I was standing at the kitchen table and I saw Drew running for the front door. Knowing something was up I met him at the door.
He blurts out "Who wants to go for a helicopter ride?! Quick, 10 seconds, they're taking 2!!!!"
I look around and everyone is just staring. "Are you going?" I said to Drew.
He nods and starts to run to the field, I ran back through the house to the kitchen door to put on my shoes and then run to join him. (Drew ran across the yard, road and field barefoot) :x
It was soooo awesome. I'm really glad we went!
Here's a pic of Drew in the chopper: Do you think he was having fun??

This is Auntie & Uncle's farmyard as we flew off: 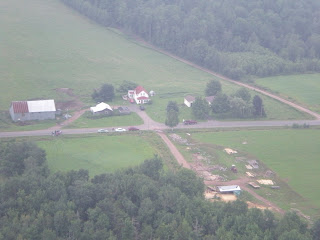 That little dirt road bordering the trees on the right? That leads down to the lake and the camper Day and I stayed in.

Day and Auntie got a ride after Drew and I: 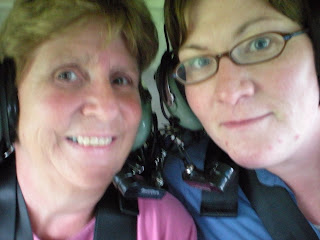 This was a big shock to Auntie's boys... she is very afraid of heights. Aaron didn't even believe she was in there until they landed and he saw her come out!

Bri and Uncle got back waaaay after all this. They missed everything!

And of course at the local store (where Auntie works) there was quite a buzz going on.... after all this is about the time of year when the government helicopters are flying around the area looking for "special crops" tucked away in the woods. lol

BTW I thought it was very generous of the man who organized this for his mom to let us have rides.

Email ThisBlogThis!Share to TwitterShare to FacebookShare to Pinterest
Labels: Halifax and NB