That's how much I spent on gas last night.

Because several customers at the restaurant last night were telling me they had heard there was a price increase suspected tomorrow. (which is now today) A BIG increase. In fact 12 cents/litre was the number being tossed about. :O
Then one of our servers got a message from her cousin (who happens to also work for us). She had been given a head's up from a friend that owns a gas station. Same info. :(

** side note: That made me curious. I worked at a gas station for 5 years. We were never given that kind of head's up, not even the owner. We would just get "the call" from our fuel supplier and be told what price we were to have our pumps at NOW. **

I didn't really believe it would go up that much all at once. The biggest one day increase we've seen was 7 cents/litre and that was considered extreme. But I also didn't want to risk being caught with low tanks and the price going up. Besides I knew my vehicles needed to be filled anyway, and Pie's truck was at a half a tank.
So on my way home from work I stopped and filled up Pie's truck, a Chevy 1/2 ton. $69.00
When I got home I let the dogs out to "do their business", changed out of my work clothes, let the dogs back in and told them I'd be home soon.
First I filled up my Chevy, an Equinox. The fuel gage was just above the red line, I had been planning to fill it in the morning. (I normally fill when its at 1/4 tank) $61.55
Then I went home and switched trucks, taking my TRUCK truck (an F250 4X4) to be filled. It was at 1/4 tank. $94.57

Now the good news is that Pie's truck is technically owned by our restaurant. So that receipt I'll take to work to be claimed and I get my money back. (too bad that wasn't the $94 one!)

Soooo, now you all want to know. DID fuel go up today? Or was all that running around for nothing?

I had an appointment at 10am today (yikes, that's very early for me! But at least I got to hear John Gormley as he was on the air instead of the later re-broadcast. :) )

Of course, it was possible they hadn't got "the call" yet...

I was still hopeful.

Then on my way home an hour later: 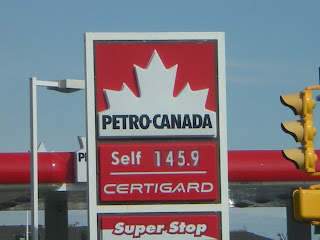 Yes folks it did happen! A price jump of 11 cents/litre!
(insert foul language of your choosing here.)

Well supposedly because of Hurricane Ike. Which hasn't yet caused damage to fuel production.

Not to mention the whole "price of oil" argument... that one ticks me right off!
Oil prices go up, fuel goes up. Immediately.
Oil prices go down, fuel stays up. (wtf?) "Because it was bought at the higher price."
Oh WHATEVER. The fuel that was in the ground when oil went up had been bought at the lower price!

Okay, I need to stop now. I'm getting all worked up about this.