Today I was feeling a bit better (at least my eyes & nose weren't constantly watering) and it was beautiful out again! I seized the chance to take advantage of this and went out.
This was my view: 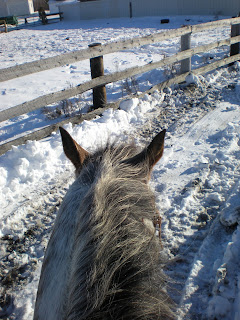 Yup, I (finally) managed to get some time riding! Look at those cute l'il ears!

Yes mom I will do my best to behave, even though you haven't ridden me in aaaages!
Truth be told even if I had just spent some time with them it would have made my day, I've been going through serious pony withdrawal during the horrible cold spell we had. And I know I anthropomorphise my critters to much but I do believe they missed me too. As soon as my truck was parked by the barn Cessa came strutting over to see me: 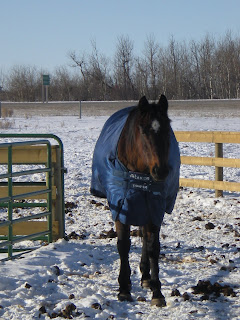 And when I went out to get them Applejack was right by the barn, happy to see me... little did he know he was going to go to 'work'. Both horses got their blankets taken off for awhile. I laid the blankets over the fence with the insides facing up to get some sun exposure (sunlight is said to kill bacteria, good for the ponies and the blankets) 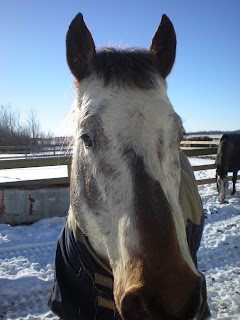 Seeing as he's had so much time off I decided to play it safe, I stuck to riding in the arena. Yes, outdoor arena. No, he didn't have to march through snowdrifts. Kimfer plowed a path around the arena yesterday so we have a safe place to ride without taking the horses out (yay! no snowmobilers to deal with!) 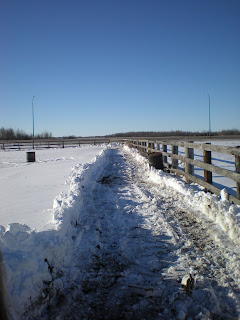 So around and around this track we went. Walk and trot. Practiced stopping off just my seat and/or verbal command. Backed up. I always have such a hard time backing straight. Its gotta be me. Even loped a bit. I'll admit that I did take him into the deeper snow in the middle (at a walk). I wanted to see how willingly he'd step off that nice path into the drifts... good boy went right in with no hesitation. 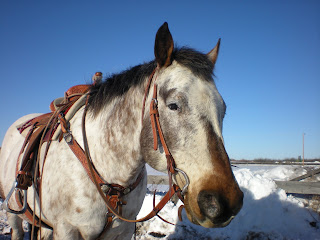 As you can see all that hard work exhausted the poor darling. (liar!) We went for just over a half hour and took it pretty easy. I didn't want to over-do it after him being off for so long PLUS I didn't want him to get too sweaty.
It was SUPER nice out though, I even took off my jacket and rode in just a t-shirt with a hoodie! (or to be a proper Saskatchewanian - a bunnyhug) :)
After giving both horses their grain the blankets were put back on and they were back out with the rest of the herd. And I was on my way home to get some rest.