Our newest little family member is fitting right in.  There was surprisingly little drama introducing him to the rest of the dogs.  He & Tucker started playing and napping together pretty much right away.  Misty feels the need to monitor the boys play time and play mother to them, Comet would really rather they both just leave him alone (which is pretty much his general attitude to almost anyone/thing these days... he's a grumpy old man)

Potty training is going so-so.  He's having some accidents but not a lot.  What's actually most difficult for me is to not cuddle him too much...  I really want to give Pete the chance to develop a bond with Walter.  They cuddle whenever possible and that bond is growing.
Speaking of Tucker, we've made sure that whenever Walter has gone somewhere we also take Tuck.  Whether that be to the vet or into the city to get used to car rides and some socialization. 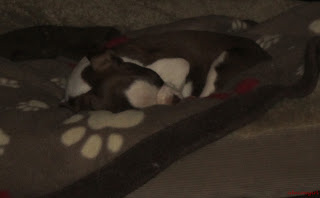 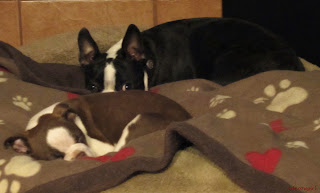 Walter seems to have a bit of a dominant personality, he gets very upset if they're wrestling and he hasn't had his chance to "win", then he gets a bit aggressive.  Tucker is so happy go lucky he'll play with almost anyone, even if they're kicking his butt.  Which explains the bite marks on the side of his face (Walter, bad puppy!)  Other than that they play together really well.  Tucker is a great "big brother", he takes turns letting Walter win at tug of war and wrestling (although like I said if Walter feels he should be winning and doesn't get to he pitches a fit)  Its quite cute to see Walter on the dog bed holding a toy with Tucker holding the other end dragging Walter AND the bed around the living room lol  And Tucker is teaching Walter all about his crazy tearing around the house, Walter just needs to get coordinated enough to keep up.

Probably one of the funniest things that's happened is Tucker realizing that Walter can't get up on the furniture yet.  So when he sees Walter playing with something he doesn't feel like sharing (usually that's Pig) he takes the toy and puts it up somewhere, usually the ottoman.  Then he carefully positions and repositions it until its as close to the edge as possible and just out of Walter's very ungraceful leaping efforts to get it... and he sits back and watches Walter try to get it (I swear you can tell Tucker's pleased with himself! lol)
at December 29, 2011