This year brought some highs and some lows.  I thought I'd run through the highlights and the not so great moments that 2011 brought us.

The most tragic event of the year was right at the beginning.  January 3rd Pie's cousin Sofia was hit by a water delivery truck and killed.  Also, this summer my Grampie passed away.
January/February saw Pie sick, again.  Thankfully he didn't get to the point where he had to be hospitalized but it was scary.  I still get worried anytime he coughs or is phlegmy.  We realized that last fall he didn't get his flu shot so we made sure he got it this year, so far he seems fine.  Lets hope he gets through the winter without getting sick

**knock wood**
A good, young friend of mine lost her talented barrel horse in a freak accident at home.  Mattie was a sweet horse and L still misses her.
The colts got their official papers from AQHA and I was pleased to see that both boys were granted my first pic of names.
Saskatchewan's horse community had a pretty bad scare of Rhino EHV-1, in fact it was a scare that hit some of the states and other provinces as well.  As a result some events I had planned to attend were cancelled and others I opted out of.
I got hit by some trolls this year due to things ranging from a couple of my Friday Funny jokes to the fact that I DARE to get my fat ass up on a horse and ride.  When I finally blogged about it I was amazed at the outpouring of support from my blogger peeps

(I'll say it again, you guys rule!)
May 31st we celebrated our 1 year anniversary of our move to the acreage... still loving it, no regrets :)
I had my scariest horse accident yet.  July 1st Voodoo went down as we were leaving 3rd barrel.  I managed to avoid having him land right on me, he only landed on my lower leg, but it was still frightening.  And up to that point it was such a good run!

I reached a blog milestone this year, 500 posts!
Barrel racing, I didn't make it to a lot of jackpots.  Between EHV and my schedule I barely made enough to qualify for Provincial finals.  I ended up missing the short go by 15 slots, the closest I had ever come!  And I'm pretty sure if I'd had my head on straight I would have made the short go, I totally blew my second run and I know Voodoo & I could do better than we did on our first run.  Applejack had stage fright and we were no where near the short go.  However he improved immensely on his second run so I was happy with him.
District finals, Applejack was sore so I scratched him.  Voodoo ran nice but not in the money.  He was extremely consistent though, hopefully with some practice we'll add a bit more speed and stay consistent.
I also (finally) stepped down from the district board.  After 5 years it was more than time.
The colts became geldings this year (yay!)  Animal losses, more serious than pairs of nutters, were Mom's dogs Mack & Holly RIP big guy and little girl.  Our dog Echo (who we had got this spring) went missing, we still haven't found him and I really think that someone took him.  But the saddest of all, for me, was putting down my beloved Cessa.
An interesting event, that probably won't happen around me again, was the "homeless lady with a horse".  Jeanne was making her way across Canada, a homeless wanderer who preferred to not live in mainstream society.  There are plenty of people like that but she 'dared' to do it with a horse

*gasp* <-- totally sarcastic
I happened to be one of a small group of people that supported Jeanne's dream and pitched in with aid and moral support.
Another item was scratched off my horse bucket list, I went for a ride at night.  Voodoo & I shared that moment under a beautiful full moon.
I took Rootbeer to a pony playday at my friend Jo's.  Dave was there to help us with driving and through some trial & error we figured out that my little guy was broke to drive!

(now to get a cart and proper fitting harness)
After keeping our eyes open for a "company's here" horse we found Smudge (or rather my horse dealin' friend Mr Tim found him and called us)  Thanks to Smudge my mom is riding and having fun.
This fall I went to another Ed Wright clinic, and I'm even happier that next year Ed will be here in the summer!  It will be nice to get some Education and be able to put it to use during the season.
For the first time in 10 years Pie got a vacation!!  We took advantage of it and went out East... New Brunswick, PEI and Nova Scotia.  It was wonderful.
December saw some new additions to the ranch, we got moos cows.  Four heifers and a steer, in partnership with my Mom & Stepdad.  And Pie got a puppy, Walter, for Christmas! 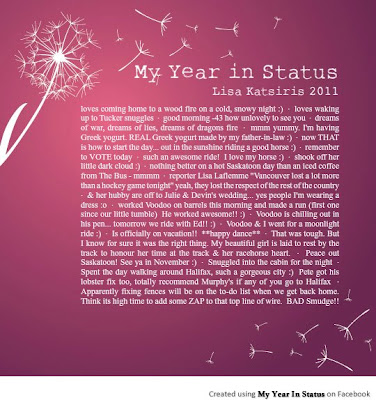