Catching up with the colts

It was farrier day the other day and when I brought Tavi in the farrier said "Holy s---!  He's getting big."

*small aside:  I was very proud of Tavi when I caught him.  I'd grabbed the wrong halter and it was way too small, so I looped the lead rope around his neck and he led in like an old pro :)  Pretty good, I haven't done a lot with them... they've been mostly turned out "being horses" for now*

I'd noticed he was getting quite big too, especially when I saw him standing next to Voodoo: 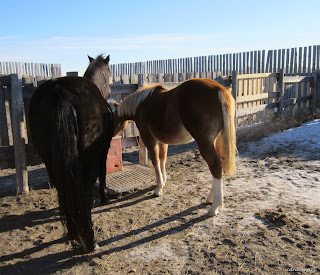 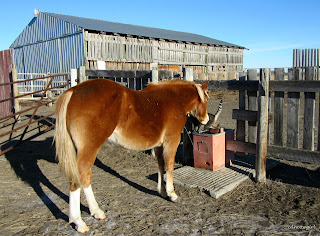 I really need to bribe my "assistant" to come out so we can halter both colts, square them up and get some 'real' pics.

Then there's Odin, he's maturing but he won't be as big as his brother (that's not a bad thing).  I like how he's coming together, he had some "issues" with his hind legs that good farrier work and growth has improved. 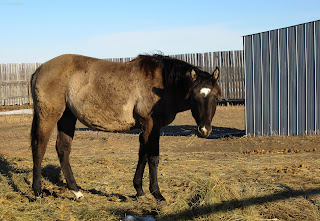 Its interesting to watch the differences in size, build and (even more so) in personality as these two grow up.  They have different sires and their dams are full sisters.  They were born with in a week or so of each other and at the same farm, were brought here at the same time so they've pretty much had the same "life experience".  But man oh man they are total opposites!!
at December 09, 2011