One of the items on my horse bucket list has always been to ride at night.  Outside, not in an arena.
Tonight I did it, kinda by accident.
What's held me back before was that I boarded my horse and didn't want to bother the people that lived there by hanging around at night.  What held me back after we moved to our place was fear.
Yep, fear.  Most of the time that the chance to ride at night is there I'm home alone.  What if something happens?  (ya I know, cuz nothing would happen in the daytime right? lol)  How would Pie find me when he finally gets home?
Well tonight I thought I'd pop out for a quick ride before it got dark.  The sun is going down early and full dark is hitting by 8pm, although by 7:30 its pretty darn dark.
I headed out around 6:15 and got Voodoo caught, brushed & saddled quickly.  We were out in the pasture in no time.
We moseyed along and when I started to feel a bit blue I asked for a lope and we flew along the track.  I was walking him out after when I noticed it... the sun was almost down.  I was riding during late dusk, if I stuck it out I'd be riding in the dark!  So I headed back out into the pasture, I snapped the pic below to document our night ride 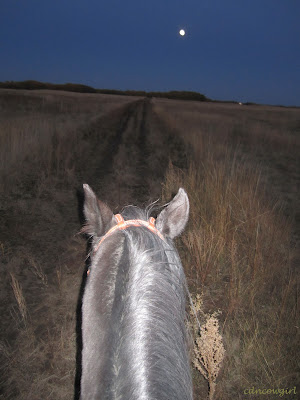 fyi Voodoo did not appreciate the flash lol
As we came back in from the pasture I decided that since it was just reaching full dark that I'd head out to the hayfield and ride for a bit longer.  Although with the moon shining as brightly as it did it wasn't really dark, our shadows were along for the ride. 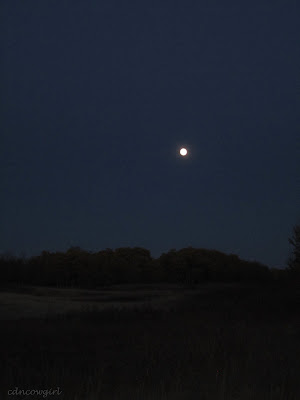