Its Time for Goodbye

Sometimes you need to do something you really don't want to do.  And as much as it makes sense in your head it still hurts your heart.  Today its my day.

After a lot of thought, and a lot of tears, I've come to the decision that its time to euthanize my sweet Cessa.  It will be the hardest goodbye I've ever faced. 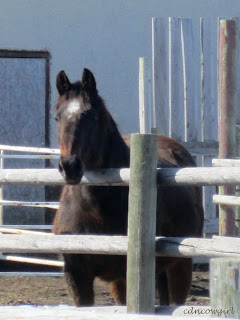 All the signs are there that its time.  Actually its almost like 'the universe' has been trying to tell me that its time for a little while now.  It seems like everywhere I turn there's something about putting down a beloved animal; an article on euthanasia, an ad for a memorial trinket, friends that are going through loss.
A couple months ago I started adding 'senior feed' (the concoction of various stuff I gave her last year) to her feed.  I'd bring her in once a day from pasture and give it to her.  Then I slowly increased it.  I've had Cessa on what was her full winter ration last year for a couple months now.  Last year she came out of winter fat, for probably the first time in her life.  This year she has slowly put on weight but is no where near where she needs to be.
It takes her well over an hour to eat, in the winter it would freeze before she could eat it all.  I know I could try a heated bucket but there's more.  There's the cold to deal with... last week it was cold & rainy for 2 days and you could SEE her lose weight.  Even with a blanket and a shelter with lots of straw she would be colder than she was last week.
She's not processing her feed properly.  You can tell when you look at her manure.  Also it doesn't smell right... it has a weird sweetish smell to it.
I'd like to try to help her get through another winter... but like my vet said, the last thing I want is to come out for chores and find her down on the ground, too weak to get up and freezing to the ground.  And I remember the deal I made with her last winter... if she'd tough it out and pull through she could have all spring & summer to play in the pasture with her boys, I wouldn't make her try to get through another winter. 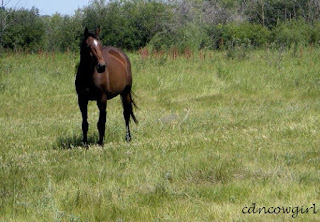 When I told Pie about the decision I'd come to his words were "I forbid it".  Do you know how damn hard it is to argue FOR something you really in your heart don't want to do, no matter how much sense it makes when you just look at the facts?
I laid out everything I just told y'all.  And I told him that she's always been such a proud horse and that she may not seem to be in too much pain right now and has a spark in her eye & spirit, I don't want her to be going downhill to the point that its absolutely needed to put her down.  I want her to be able to go with some dignity & pride, not suffering.  Thirty is a lot of years for a horse, especially a thoroughbred.
This girl means the world to me.  She's been there for everything the last 18 years (I got her when she was 12).  Her mane has soaked up lots of tears; happy tears, angry tears and sad tears.  For years now I've told her everything.  And although it may sound corny, I really believe she saved my life.  I went through some bad times and depression and there were days that the only thing that kept me going was knowing I had her to take care of.
She's taken care of me & been there for me all these years, its my turn to be there for her... no matter how hard it is.  I'm going to try to be the strong one tomorrow and not cry until its over, I don't want to make it harder on her. 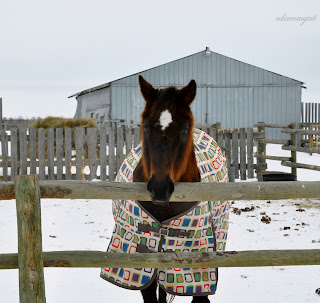