A couple weeks ago Pie & I ran into Mr Tim at the local gas station.  He gave us one of his standard greetings "Hi there, have I got a horse for you".  Then he asked if we were still on the lookout for a "company horse".
He had an 8 year old, dead quiet gelding.  Mr Tim called him 'cowboy broke' meaning that he was used by an old cowboy type to work community pasture.  He wasn't broke with anything fancy; neck rein or plow rein to turn, go forward, go backward, stop.  No buck, bolt, spook or other bad habits.  The gentleman that had him before would work pasture then haul him home for the grandkids to ride.  He'd get the winter off and come spring just saddle up and ride, no silliness.  And he had been in some parades.   Pie & I made arrangements to go check him out later that night.
We liked what we saw and Mr Tim said to take him home on trial for a few days.  He was nice & easy to handle and catch.  Shann came over to help me put him through his paces.  I saddled him like a total dude, thumped the saddle around, stirrup got 'stuck' underneath, fumbled doing everything up... and he stood there like a champ.
The only thing that had me a bit concerned was that when we asked him to pick up a jog he automatically jumped into a lope.  But oh what a nice, lovely, easy to sit lope!  And as soon as you picked up a bit of rein he came back down.  I kinda figured that was from his pasture riding, which is what Mr Tim said as well when I talked to him.
Another thing I liked is that when Shann was riding she 'fell' on purpose, she suddenly leaned forward onto the horn and leaned over his shoulder and he stopped.
We decided it was worth trying him out.  I'm so glad we did!  My mom came out and rode him for an hour.  MY mom!
Now in case any of y'all don't remember, I come from a non-horse family.  My mom isn't a rider.  She's ridden only a handful of times, the most recently being 12-15 years ago.
Not only did my mom ride Smudge but she also trotted and loped, on purpose!  Well to be honest the first time she loped it was an accident lol.  But he is such a nice guy that she felt safe enough to ask him to lope again a bit later :) 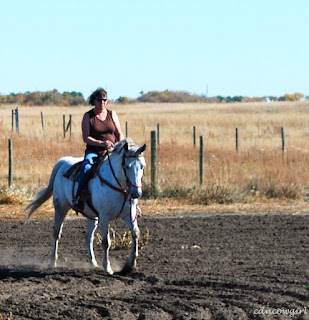 Momma & Smudge :)
He introduced into the herd nicely.  Even Voodoo gets along with him.
I've had a couple people ask what he is and honestly I don't know.  I'm thinking he's at least part some kind of Western stockhorse (QH, Appy, Paint) and more than likely something else.  It doesn't matter to me, I don't breed show and he's a gelding.  Sure you can tell some stuff from papers but they're no guarantee.  It doesn't matter, we were buying him for his mind and what he can do.  So all I know is he's a grey 8 y/o gelding.
Oh and one last kinda funny thing.  Pie just could not get that poor horse's name right for the first few days.  Instead of Smudge he got called Smut and Schmuck lol
at October 01, 2011