Last Friday was farrier day, all the horses get brought in and tied up to wait their turn... well lookie who stood tied up just like the grown up horses: 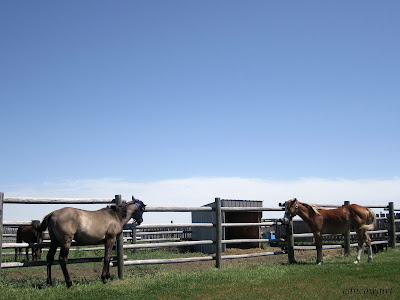 Odin & Tavi weren't ready to be trimmed, Mr Farrier will be out in two weeks to give them a trim.  Instead they both stood tied for an hour soaking up some patience.
Odin has only been tied fast once before, and that was for some spring grooming.  When I went to untie him he had a hind cocked and was napping.  He had not pulled at all, there was no extra tightness to the knot.
Tavi has been tied fast twice, once for the same spring grooming and the first time was when we trimmed his feet for the first time (that was a bit of a rodeo!)
He also was napping with a cocked foot, and his knot was slack too.
Both boys aren't really being put through much of a kindergarten.  They get caught and led occasionally, brushed, feet trimmed, and touched pretty much every day.  Soon there will be a bit more expected... we'll be doing some trailer loading and light sacking out, more being tied, maybe some ponying and other light groundwork.  I'm pretty much letting them learn to be horses for the most part.  A lot of lunging and such is not when horses are really young is not something I believe in... IMO its hard on them mentally & physically.