Just before Christmas my mom brought home two puppies. (see post here) For those who don't remember here's a short reminder:
Mom already has a dog, a Saint Bernard by the name of Mack. The new puppies were teeny little miniature Dachshunds. Cuter than heck but apparently terrifying to Mack. I think the main reason was that Holly & Coco were too little and fast for him to keep track of.
Well the girls have either won him over with their cuteness and they're all one big happy family OR they've killed him... 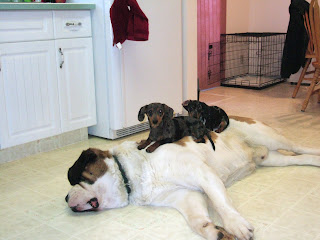 ps - even the cats are okay now. One (Sasha) just steers clear of them and acts like they're not there. The other, Kahlea (sp?) will actually play with them.
at February 21, 2009