Remember my plan to ride Smudge while there were people around my place for that clinic?  Yeeeah, didn't happen.  I was on the run all morning getting stuff ready for lunch (I was providing a bbq lunch)  Well after lunch the wind came up and it started to rain.  The kind of weather that can put some extra silliness into a horse.  So I decided to go the smart route and let him wait a bit longer.  Instead I decided I would ride him one day this week while Pie was around.
I also altered my game plan a bit, I decided I'd add in what BEC mentioned.  I'd catch Smudge, brush & saddle him and then tie him up and let him soak while I worked other horses, cleaned the barn, etc.  He needs it, the boy is impatient and paws.
Monday it was rainy so Pete & I went green-housing to get plants for the yard.  Today was nice, and being dry & sandy it was drying up enough to ride so I caught up Smudge.  Oh man, this is where I have to make a "bad horse mommy" confession...  You know how sometimes you don't see what's right in front of you?  Yeah that was my problem.  I check the horses daily, but I hadn't taken a real hard look at Smudge in awhile.  I mean I noticed he was fat but WOW I didn't notice quite how fat he is.  When I joke that he looks like he could be Percheron its not that much of a stretch at all.  After I brushed him I weight taped him, I'll let you look at the pics and you can guess what the magic number was lol   Then I saddled him and tied him up outside.
Applejack got brought in, brushed, weight taped (he's down 115 lbs or so!) :) saddled him up and went for a ride.  The good news about Smudge being so fat is he makes Appy look trim: 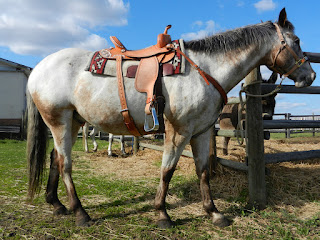 Sorry, this was the best pic I could get of Applejack today, he did NOT feel like posing lol 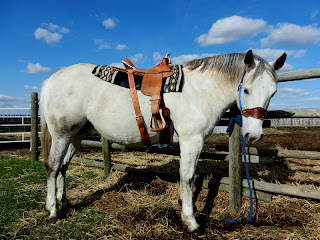 (yes the sky was that blue today) :)
Smudge... "guess my weight"
Oh and this should help y'all guess, that saddle is NOT a kid's saddle.  Its a 15" Billy Cook barrel saddle.  I am a very bad horse mommy :(

(and yes I know the back cinch looks terrible, its getting adjusted!)
After riding Applejack for awhile I decided to see if I could pony Smudge from Appy.  This is another alteration I've made to Smudge's plan.  With how fat & out of shape he is I've decided to move him to dry lot and put him on the diet plan.  Also, it just didn't seem fair to start riding him when he's that fat so I will lunge him (if he lunges, we'll try that out in the round pen) and pony him.
The arena was a bit muddy in places but not slick or too deep so I grabbed Smudge and ponied him, which took a bit of figuring out lol  We went for 20 minutes, walk/trot and one lap of a lope (just to see if we could)  After Appy was still just as fresh, in fact he kept wanting to break into a lope and was getting in his "I feel good!" prance steps here & there, he's such a goof!  Appy was rode for a total of 45-60 minutes tonight, Smudge was ponied for 20.  Appy worked at a walk/trot/lope, Smudge walk/trot (except for that one lap at a lope) and Smudge was WAY sweatier than Applejack.  Poor guy! 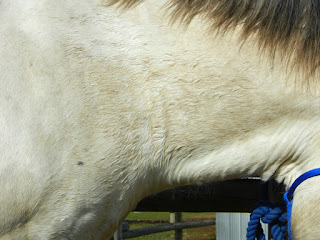 Trust me, that may not look like much but he was sweaty!
One good thing came of today, after having to 'discuss' things with Smudge I'm feeling much more comfortable in my new saddle.  I wasn't sure about my seat in it, it felt a bit loose and like I'd slip out of it.  No worries now lol  I do think that next time I'll use a rope halter, so hopefully we'll have less to 'discuss' when I say come along. 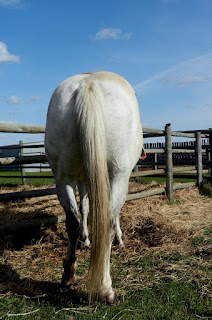 And lastly, this was a picture I was thinking of for last week's Sunday Stills.  Anyone know what song I have in mind for this pic?
at May 29, 2012