or "Oops I Bought a Horse!"

Yeah, that's right... she's not a boarder, Lefta is my new horse!  And it was really kinda an accident, finding her that is.  And yes, I know she looks quite a bit like Cessa... I guess you could say I have a type, and that's a 'plain little bay' lol

Sorry for the not so great pics but she's such a pocket pony that as soon as I go in or near her pen she's THERE.  So I get lots of pics like this: 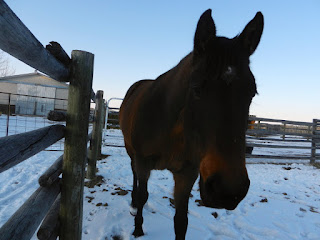 I know, I know, what's the story?  How did I find her?  Why did I buy her? etc etc
Well I have a habit of cruising the horse for sale ads.  Usually someone I know is looking for a horse.  Even if they're not its nice to keep an eye on the market, IMO its a good idea to know what horses are going for in your area in case you need to sell one.
(even if you never plan on selling your horse you don't know what the future holds, there's always that 'what if')
So one day I was innocently cruising through one of the many horses for sale groups on Facebook when this pic caught my eye: 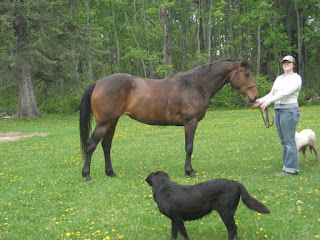 I really liked the look of her, then the name caught my attention "On The Money Girl KR".  Hmmm... On The Money Red breeding?  Before I could stop myself I'd messaged her owner for more information.
She was 5 and green broke, but quiet enough that they'd tossed beginners on her to go for a ride.  She was indeed a granddaughter of OTMR, her bloodlines also included Jet Deck, Lady Bugs Moon, Crimson War and Docs Prescription.  Now I'm not much of a bloodlines person but all those names were ringing bells.  So I messaged a friend of mine with the sales pic, sire & dam's bloodlines and the little info I had.  Her advice?  At that price if I was interested then go look!
As I have mentioned, I wasn't really looking for a horse for myself.  But there has been a tiny thought in the back of my head to someday get a nice horse that had some barrel horse breeding.  I hadn't been expecting 'someday' to come for a couple years but here she was and a steal of a deal too!
I thought about it a bit... she was just what I was looking for, it would be nice to have a backup horse  (Appy has been off & on, what if Voodoo was hurt too?) and it would give me some riding young stock confidence for when its time to get on the colts (its been a long time since I've been on a youngster).  So I thought what the heck, do it.  I made plans with the seller to go see the mare, and I kept it really hush hush (I think I told maybe 4 people).
When I went to see her she was out in the field, they caught her easy peasy and she left her herd mates without a fuss.  She stood nicely for grooming and saddling, let her feet be handled nicely.  I had both the sellers (sisters) ride her, then we switched out to my saddle and they rode her again, then I got on.
Well they weren't fibbing about her being green, she definitely needs to be more educated in the bridle.  But she was calm and willing, even though I was a bit nervous - I don't like getting on strange horses, even less so on iffy footing (thank you winter) and it was the first time I had been on ANY horse in a few months... here I was getting on a green, strange horse?!  But she was good!  She was willing and soft even though she was a bit uncertain.  I had felt her legs over, watched her move while they were riding her and was pleased with the test ride (for what it was) and there was just this feeling that she was supposed to come home with me.  She felt like she wanted me if that makes any sense??
After a bit of chatting we struck a deal, I'd load her and take her home.  Pending a vet check, to be done ASAP, the sale would be final (I had already tentatively scheduled a vet check for that week).  If for any reason she failed the vet check I would return her the following Sunday.  Payment was made and there was a signed and witnessed contract to the conditions, if she was returned I'd be refunded in full.
She loaded like a pro, no fuss getting in my two horse trailer when all she's ridden in were stock trailers.  I got her home and put her in a pen by herself... no sense risking injuries!
The vet check went great.  No issues came up and she kept a calm, friendly, interested attitude throughout which made my vet say "if she decides she doesn't want to run and be a barrel horse she'll make a heckuva kids horse!  Kids horses are born not made and she has a wonderful attitude."  When we finished the vet check I tied her up while I put Rootbeer in her pen (might as well have a roomie now) :)  The sellers had said that she had never seen donkeys or ponies, and most horses get a bit freaked about the little ponies.  She pricked her ears, walked over to Rootbeer with a "what the heck?!" look and gave him a sniff.  She must have decided "well you smell like a horse" because then she stuck her face into the bale beside him and that was it for introductions!  After watching them for a bit to make sure there weren't any delayed shenanigans I went in the house to call the seller and let her know she wouldn't be coming back :D
She, she, she... well I wasn't using her name for most of the post because I changed it.  They had been calling her MJ and it just didn't flow off my tongue (and I confess every time I said it I thought "Micheal Jackson" lol)  She didn't seem attached to the name MJ, I started calling her Girl before the vet check, after she passed I started calling her Lefta and she responded right away!
Now why Lefta you ask?  It seems that money themed names are common... Cash, Dollar, Moolah, etc.  Well she's an On The Money Red grand baby, Money is part of her name so why not give the 'money' theme a twist?  Lefta happens to be Greek for money! (although that may not come up in a translator, it might be slang lol)  Also it happens to be one of the names on my list of possible future horse names... perfect time to put it to use I'd say ;)
at March 06, 2012