After a busy weekend I finally have time to blog! And good thing too, I have a few questions that you may be able to help me out with. Some fun or silly but at least one that I hope someone can help with.
I'll start with that one...

found its way into the barn. :(
In the 15+ years that Kimfer's parents have owned their acreage we haven't had any trouble with skunks, until this year.
Bear, the 'outside' dog, has been sprayed a few times. And there has been that skunky odour in the barn occasionally. Usually in the feed room. A skunk trap was placed in there but the only thing to get caught were the barn cats.
Sunday Kimfer and I were in the barn gathering our gear for the jackpot and we noticed that funky skunky smell. When I went into the feed room to get Applejack's grain I noticed a chunk of what could only be skunk fur on the floor.
That's when I placed the other, very faint, odour. Shotgun. (I'm not very familiar with firearms or I may have placed it sooner).
We left all 3 barn doors open to help air out the barn while we were gone.
When we came home we noticed that Kimfer's dad had blocked the "kitty door" to the feed room. The skunk smell was out of the barn :) 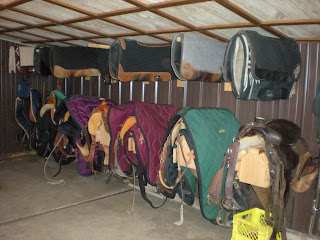 But when we went to put our tack away, we noticed the tack room was very skunky :( We have nowhere else to store the tack so we did put it away.
Turns outs that Mr.H had trapped another skunk in the feed room (he thinks). He was hoping it would go into the trap. Well the feed room shares a wall with the tack room, we think that's why the tack room was getting smelly.
Here's the million dollar question... does anyone know how to get skunk smell out of tack without harming it? ALL kinds of tack, saddles, pads, saddle covers, brushes, headstalls, reins, bits, horse boots.... EVERYTHING.

Now here is a "fun" question:
Does anyone know what this is- 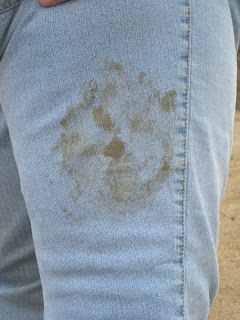 And one last question... I'd like to send out some Christmas cards but I know that not everyone a)wants to give out their address or b) celebrates Christmas. If you are one of the people who would like a card e-mail me your address and I'll start sending. (I've already found some cards and started choosing who would get which)