Kimfer & I had entered a clinic being held in Aberdeen and taught by the Berteig sisters. (Shaleh and Shantel). It was our impression that it was to be an "all around" kind of clinic but I knew the sisters have a strong reining background so I thought there was a good chance it would have an emphasis on reining.
Saturday when I got home from work I tried to chill out and get into a "bedtime" frame of mind ASAP. I think I got to sleep around 2 am. Wake up time, 5, came waaay too soon. It was a bit of a shock to wake up and find it still dark outside! lol
I had most of my stuff together the night before so I just had to wake up enough to put my contacts in (I hate wearing my glasses when I ride) and finish throwing together lunch, then I was on my way.
I drove to the barn and Kimfer had the horses caught and tied to the corral fence (barn still skunky). We hitched the trailer, threw the gear in, put blankets on the ponies and were on the road. Yeah, we managed to leave the yard a bit early!
We drove down the highway, through a dark Saskatoon and pulled into Aberdeen at 7:20. Parked in front of the equestrian centre (an old hockey arena the town had converted into an indoor riding facility) we realized we were the only ones there...
The clinic was to start at 8 am. Where was everyone?? Shouldn't they be here to get their horses tacked up and warmed up?
Kimfer & I decided to stay in the truck for a bit, it was chilly out and the wind was C-O-L-D. Around 20 to 8 another rig pulled in. Just before 8 everyone was there (except our barrel friends Holly & Brenda who had also signed up).
With our horses ready we went inside to find out where the horse entrance was. We found someone to tell us where the entrance was and brought our horses in to warm up.
The start of the clinic everyone was to ride together, then we would be split into 2 groups. We started with everyone introducing themselves and explaining what they hoped to learn/accomplish. My goals were general improvements to horsemanship as well as to build my confidence and work on my position. I explained that due to various injuries I was sure that needed to be worked on.
Turns out that Kimfer & I were the only ones who hadn't taken a clinic with S&S before (other than Holly & Brenda who were still MIA). Shaleh pulled us aside and explained a few things that they do along with how and why. While she worked with getting us up to speed with the others Shantel worked with them along the rail on collection.
Holly & Brenda showed up and were brought up to speed as well. After the starting ride group 1 rode (my group, which also included Holly, Brenda, Kimfer, and 2 others "R" and "M"). While group 2 was riding we put the horses up and warmed up in the lounge. Then it was lunch time and after lunch group 1 rode and then group 2.
I think I learned enough to make it worthwhile. I really enjoyed the sisters teaching style. I found them very encouraging and helpful. They weren't afraid to get after you but they made sure to find positives as well.
I got tips on more effective collection (something I will admit I need to work on more) and better leg position. I was also very pleasantly surprised to be told that I have fair hands and am pretty soft with them. :)
My one complaint is that "R" tended to monopolize the sisters time. If he couldn't get the undivided attention of one of them he would ride over to the other and get hers. That was fairly annoying. At first Kimfer & I thought it was because he was a reiner and that they were the ones focusing on him, but during the second group ride it became quite apparent that he was the one seeking the focus.
Then again, it seems there is always a person like that. I will also say that both sisters are quite good at working one on one and still keeping an eye on the group at large.
The wind had gotten bitterly cold by the time group 2 was starting so Kimfer and I decided to hit the road. Boy was I glad we did... it was starting to snow and the roads were getting slick. The snow being blown across the roads made driving home NOT fun at all. We had 2 not so great moments. One on the freeway when the truck and trailer started to slide around and another when the brakes locked up as we approached a red light (thank goodness the next lane was empty and I just moved over and stopped in time). Needless to say I was very relieved to get the horses home and drop the trailer!
Driving from the acreage to my house wasn't as bad... funny how not having the horses along makes me less worried about a wreck! lol I still drove cautiously but the roads were quite a bit better, until I got to my neighbourhood. My streets were ICY.
But still I got home safe, and while I was unloading the truck I snapped this pic of our first snow of the year: 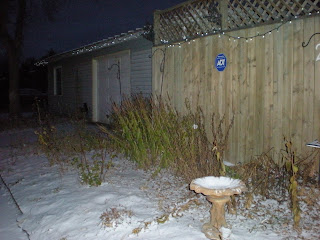 My side yard from the street. I see there's a section of Christmas lights burned out on the garage. My poor garden looks so scraggly and pathetic this time of year. :(

And here is a picture of baby Zoe, my brother's little girl. She was born Monday (Nov 3rd) In this pic she is 2 days old: 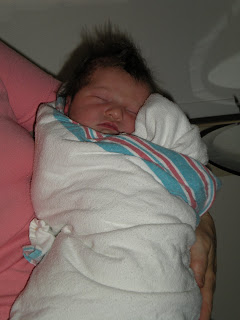 Sleeping in her grandma's arms at the hospital.
I don't think I've posted a pic of baby Lucas yet. This is my sister's boy. He was born June 10th (I know! Bad auntie for not posting a pic sooner!!) 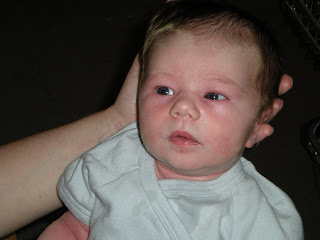 In this pic he is 13 days old. My sister lives in Edmonton and it was the first time I got to see him. I did spend 2 weeks with him later though, 24/7. My sister and I travelled together when I went east for my dad's operation in August. They're actually in town now as well. My sister flew in this afternoon and I'm meeting them for supper this evening!