At the end of May I co-hosted and rode in a barrel racing clinic at my place... well, mostly at my place. We did run to the neighbour's indoor arena on the second half of the first day because we'd been rained on all morning!
We've been going through a drought for a few years now and this spring has been the driest on record.  I don't think a single girl complained about having to ride in the rain but after lunch we were all chilly and the indoor is right.next.door. and was ready to be used as a back-up so it was a no brainer to go there.


(seriously y'all, I can see it from my barn and there's even a handy gate in the fence between us lol) 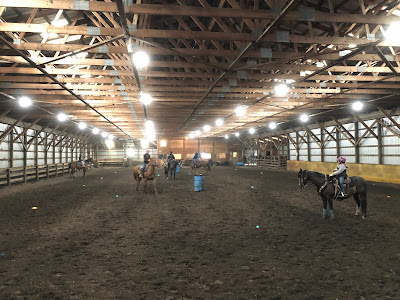 I've known Rebecca on a casual/acquaintance level for years, I've always admired her horsemanship and just what an all around nice person she seems to be.  Last year was my first year riding with her though and wow... she is definitely as nice as she seems!  Very positive but doesn't blow smoke and rainbows up your butt.  When you need the hard advice she gives it but in such a way that you feel motivated and inspired so when there was an opening to co-host one of her clinics at my place I jumped on it.


That rain the day before sure made for lovely ground at my arena on day 2! 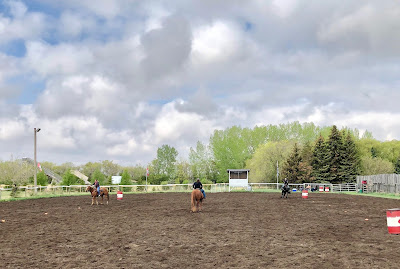 On the first day Rebecca has everyone take a run, at whatever speed and level they're comfortable working at.  We all had handed in sheets with our names and information about ourselves and our horse at the start.
After watching everyone take a turn the work began... different little drills that were not necessarily "barrel racing drills" but that lead up to making all parts of your run come together, from the approach, to the rate, turn, leaving the barrel. Things that help keep your horse soft, things that help with horses that are too ratey, how about all.the.things. lol

The next day we worked on more drills, including ones more specific to barrel racing.  Then at the end we all took a turn making a final run.  I think everyone made an improvement and had a good time, from the girls just starting out (or with horses that are starting out) to the girls that rodeo, there were many "ah-ha! moments" during the two days.
At the end of the clinic Rebecca put notes on everyone's paper and spoke to them individually, pointing out their improvements and where they need to put in some work, any equipment changes made during the clinic or recommended, and which drills are the best for that horse/rider team to utilize. My co-host and I already have requests to be on the list for next year, I'd say that's a success!

For my own part in the clinic, I'd used Frosty the year before and was planning to ride Lefta this year however she's been fighting a minor injury and was still on the 'rest' portion of getting better so Frosty got the call again. BEC had done a fabulous job with Frosty while he was hers and for the most part he's maintained, however I am not the rider she is - #goals! ;) and while I learn and get better he needs to be brought back up some. And holy heck it's coming again, he's better this year than the last couple that I've had him and since the clinic he's been nice and soft on and off the pattern, and on the pattern he's sharpened up.  I had been considering giving him a semi-retirement this year but he answered me with a "No ma'am I'm ready to rock!" lol
at June 13, 2019