This year I had two clinics I wanted to take, the Rebecca Beebe clinic (barrel racing) from the prior post and the Tilley clinic (horsemanship). This is my third year taking the Tilley clinic and I was pretty excited to take my green Frenchmans Fuego filly Sarita.  Although I was a bit nervous, I'd hurt myself two weeks prior so I hadn't rode and she'd had quite a bit of time off with only a couple rides this spring.
I knew the clinic would be a good fit for her, what I didn't know is how much it would test her.  I knew the tougher work and riding in a bigger group of horses would be a test, but Mother Nature decided to bless us with some rain - finally - and that made both the weather and the footing a bigger test than she's dealt with yet.
It rained a bit Friday, enough to make the arena fairly wet although there were some limited areas where it was kinda dry (rubber boots for Friday night's groundwork!)  The good news is the Biggar Rec Valley arena is sandy and can handle a lot of moisture and still maintain safe footing. 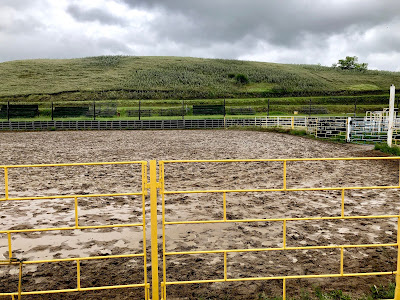 hmm, maybe the drought is over?

We worked in three groups. My traveling partner (and sponsor NBET) and I were in group 1 (actually NBET brought 2 horses so she was also in group 3).  Group 1 was mostly either green horses or people who hadn't taken a Tilley clinic before. NBET has and her horse wasn't exactly green however he is a rehab  project so physically group 1 was a good spot for him.
Anyhoo... Friday was groundwork for group 1, we never did get on although we did work saddled in case time permitted and we got through the groundwork with enough time to ride.  Sarita did fairly well as long as we weren't in the slop, and we kept getting squeezed out of the dry spot we had staked a claim on.  Not a big deal as she does need to learn that we won't always have good ground, but for a filly that's 4 and we've had a drought pretty much her whole life... this learning to deal with mud and water and not just a little bit of it, it was a bit of a challenge at times for her.  I was also having a bit of trouble with some handling, timing was off and I was just not quite getting a few finer points, but overall it went pretty well.
After group 1, before I went to watch groups 2 & 3, I put Sarita up and got her settled in her pen and tossed sleeping bags into the gooseneck and organized stuff for the night in the trailer (super thankful for good friends!  Doig lent NBET & I her 4 horse gooseneck for the weekend otherwise we'd have been tenting!) After group 3 I took Sarita for a walk and then there was a little visiting, and then... was that a raindrop?  And another?  Hmm, yep it was going to rain so I put my BOT rainsheet on little miss then visited with everyone a bit longer before heading to bed.
I woke up a few times overnight and every time I did it was raining.  I was so thankful we weren't tenting!  The trailer isn't an LQ, heck it's not even a weekender.  But it was dry and snuggled into my sleeping bag I was warm.

Saturday morning it was still raining.  There was no indoor arena as a backup, it's just not feasible due to the size of the clinic and the location.  John spoke to MJ, my friend that was the clinic "host", and due to the miserable weather they decided to break the three groups into two and to do more Q&A stuff inside (there's a kitchen/general purpose building we could sit in to talk).  I did chores and took care of my own morning needs and then saddled up for round 2.  There was no dry spot to work in, so I started in my rubber boots.
The groundwork went better, I did have to get one on one help from John with a bit of stuff that I couldn't get.  He came over and one small change and things started to smooth out.  He did take Sarita for a bit again later though, she really didn't like letting us in her right eye.  But that came around quickly and it was time to get on.  Put on my helmet and switched out my rubber boots for cowboy boots - which were instantly soaked - and we were off.
It rained the whole morning of our 3 hour session.  My sweet little filly just rolled with it and worked.  The mud and weather didn't get to her, the larger group of horses didn't get to her.  And despite the weather no one complained, after this drought I don't think anyone dared! lol
Like John said, it's better to prepare your horse (and yourself) to work in conditions like this than to need to work in them for the first time when the cows get out or you're entered up in a rodeo ;)
After my group was done I unsaddled Sarita and switched her to her regular rainsheet and gave her some more cubes. 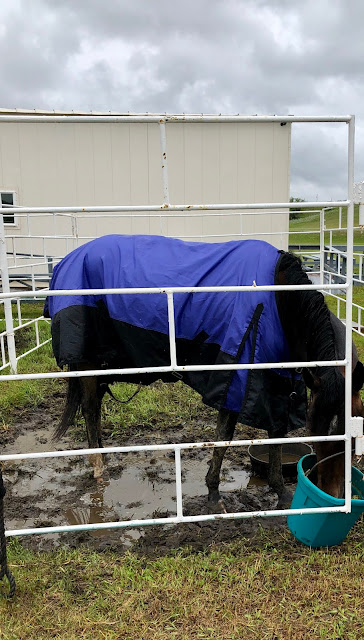 the pens were originally all grass

We broke for lunch after my group and had some Q&A time in the kitchen. John has a lot of really good stories and insights to share so it's always interesting to talk with him.
The weather continued while the other group worked, in fact at times it was worse so they took a break and came in for more Q&A.

After we wrapped for the day I took Sarita for another walk before supper.  Supper was a potluck and of course more visiting through the evening.  I called it an early night, checked on Sarita and went to bed.  When I woke the next morning it sounded a bit breezy but there was no rain!
With the improved weather we were back to working in three groups.  I fetched Sarita and saddled up, again I wore rubber boots but brought my cowboy boots to the arena.  My chinks were still a bit dampish feeling from the day before but were mostly dry so I still wore them, if anything they'd cut the wind if it was too chilly and would help keep some of the mud off lol
We checked out our horses on the ground and after a very brief bit of groundwork we were mounted up.  Sarita's groundwork was so much better the third day.  Still stuff to improve on but she followed a feel much better and was moving out nicely.  The arena was still quite muddy but I was able to keep my feet dry when I got on (glad I brought extra boots!)
Day three was tougher, we were doing things that were a bit more advanced but still in the green horse realm.  I had noted some improvement over day two but wow, by the end of day three I could really see and feel a difference with Sarita. 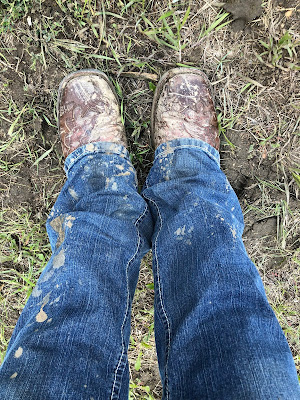 probably the cleanest and driest I was all weekend lol

I had quite a few compliments on my little filly this weekend, from how well she handled her first big grown up outing, how pretty she is, how nice she seems to be to handle, how smooth she is.  I know I really like her but it's nice to hear other people think she's a nice horse too :D 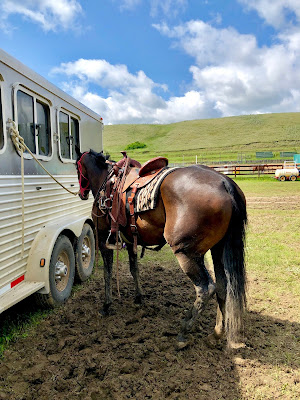 Covered in mud, chill and relaxed at the trailer after our final work of the weekend,
that's about the driest the ground ever got lol
at June 27, 2019