Wow time has gotten away again... at first I was waiting for pictures, then I just plain got busy.  Doesn't help that I have horrible wifi at home right now.  Bad wifi makes me grouchy BUT I have a nice little place in the country with my ponies at home so (for now) it's a fair trade off ;)
(seriously though, Saskatchewan needs to do something about rural wifi!!)
So now this will be a bit of a catch up post...

For starters I entered both Lefta and Frosty in provincial finals.  Frosty won the 4D in the first long go! Both horses ran fairly well and Frosty ended up making the short go (my first time ever making short go at provincials!!)  Unfortunately I forgot how the *bleep* to ride lol
I sent him in from a bad spot in the alley.  Then I didn't rate worth a darn on first which in turn resulted in him coming around so that the barrel was right.in.front.of.him but Frosty is the most honest horse I know and he will not hit a barrel... not if HE is the one hitting it.  So instead he reared and threw himself to the side so he didn't hit it, yeah that ate up some time.  Once we got our poop in a group and lined out properly for second the rest of the run went well.  Obviously we didn't place #understatement
But you know what, I achieved a goal and have room to improve so it's ok!

Up next, my good friend MJ and I took our pretty bay bombshells to Ponoka!  This arena has been on both our goals list for awhile, there's simply nothing like it around here.  The barn is set up great, the staff are amazing, and the arena... holy heck the arena!!  Indoors, small warm up area right by the actual arena, and it fits a full standard pattern!  Calnash Centre is just awesome
MJ and I drove down for the time onlies and warm up jackpot on Friday.  And thank goodness we did!  That arena can mess with your head and some horses have a few issues too, such as our horses... they did NOT appreciate the shadows and slight woosh noise from the giant overhead fans, particularly the one directly over 3rd :o
The warm up jackpot went well, Lefta handled everything better than I thought she would and ended up picking up some money in the 4D!  A friend I've known since high school (so yeah, forever lol) lives about a half hour away so he came to visit and watch.  Dev video'd for us (after a quick tutorial lol) and asked tons of good questions, seeing how he's completely NOT a horse person it was nice to have someone so interested.  Also pretty awesome that even away from home MJ and I had someone in the stand to cheer for us  :)
Day two my sis and her kids made the drive from Edmonton, so yeah for fans again! ;)
However our run wasn't great, Lefta just didn't fire.  She seems to have a slump when she's at multi day events and stalled. When I lamented the fact on Facebook my friend CK texted me "you brought your patches right?  Use them!"  We had a quick text convo, I knew I could patch for pain related issues but didn't realize it could be used for an energy boost!
After our runs we touristed around Ponoka - home of the world's largest bronc statue
Day three I got up and after chores put some patches on Lefta, and am I glad I did!  She ran her best run of the three days!  However the fast time crept up each day and we landed in the crying hole in 4D.  Still super proud of my little mare :D 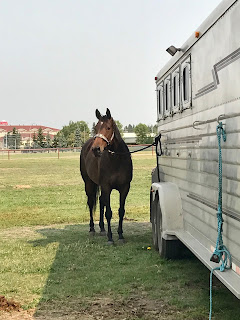 And then there was district finals -
This year our district finals had over $20,000 in cash - I am *SO* proud to have been part of the board that organized, fundraised, and put on this finals. Everything went so smoothly!  I think it was even better than our 25th anniversary finals last year!!  The same board put on both events, and this year at our AGM we handed the reins over to a new board, I wish them the best and I'm looking forward to being a competitor only! ;) lol
Both horses ran well, Frosty came back to the short go again, last year we were reserve 3D champions, being 0.257 too slow for that 1st place slot.  This year we were 0.003 too fast!! And ended up bottom of the 3D
(last year we ran a 3D race, this year we changed it to 4D)
I was thrilled with how well he worked though, but I'm not gonna lie it was a bit bittersweet to miss that buckle.
Lefta didn't have her usual day 2 slump, because I patched her this time!!  However she hit a really bad rut on 1st barrel and almost went down.  A bit of a heartbreaker because she sure was firing when she went in for that run.  She wasn't hurt though, which is the most important thing.
(if you want to know about these patches let me know!)
And after being bugged that Lefta and Voodoo have some blingy tack and Frosty's was too plain he finally got a "fancy" set too, so here it is in action - I think he's earned it ;) 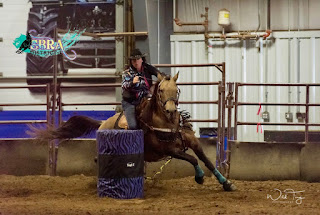 I have to say, I'm SO happy with this season.  My horses worked well but most importantly I found the fun in racing again!  Making a few changes in my circle of friends has definitely helped and made it easier to keep my mental and emotional outlook on the positive side :D
at October 17, 2017