I bought Odin as a weanling, maybe it was a sign but the deciding factor between him and Owen, the bay colt I liked, was "well if it ever came down to it colour does sell"... and on July 16th he sold. Well, he had been tentatively sold since end of May/beginning of June.  But until they showed up with a cheque and took him I didn't consider it a done deal.
My runty little colt had grown up into a pretty nice horse.  Quite a few people had said he'd be lucky to hit 15hh and he was definitely 16hh or more this spring. 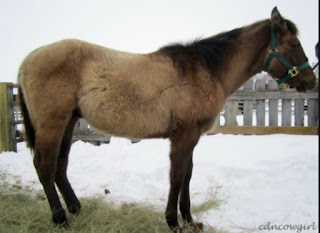 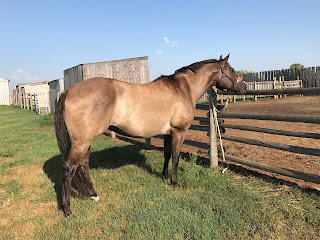 Odin pictured on July 16th, waiting for the buyer to come check him out
I won't deny that I have a bit of mixed feelings about selling him.  I liked him, he was a nice enough horse but he needed a job and wasn't working out for what I wanted.  And I just don't have the time to keep my two main horses in shape for barrels, keep Voodoo used, and keep Odin going.  He was still on the green side from being set aside so often and he was at the point he needed steady work to really progress instead of always being just a side project.
A friend of mine put a few rides on him and said she knew the perfect home for him, sent them a few pics and videos and bang he was "sold".  With the current horse market here and hay being a bit scarce (omg it's SO damn dry this year!) I was happy he sold so quickly.  But then there was that waiting game for them to actually come and see him... and then it turned out the gentleman ("D") couldn't make it so he sent his girlfriend and daughter.  They hemmed and hawed a bit but in the end they completed the cheque "D" had sent with them and loaded him up.  He's now off to be a ranch horse with the possibility of being a head horse.  Pretty much perfect careers for the big guy.  And I'd say they like him because a day or two later my friend that helped arrange the sale tagged me in a photo on Facebook, "the girlfriend" had made him her cover photo :)﻿ 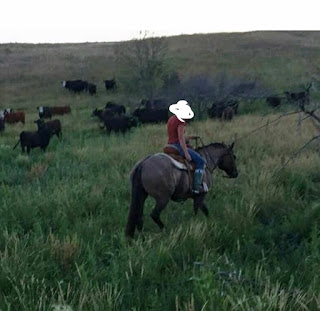 Photo shamelessly borrowed from "the girlfriend's" FB
at July 28, 2017

Email ThisBlogThis!Share to TwitterShare to FacebookShare to Pinterest
Labels: Odin