It's been quite a spring & summer for weather.  Some places have had a horrible drought, others have been at the opposite end of the spectrum and had records amount of rain, and then it seems like a large portion of the States have suffered through an incredibly bad fire season.

Hay has been on the mind of a lot of horse owners I'm sure.  I know it was on mine, Saskatchewan was one of those places with lots of rain.  I swear it seemed to rain every 3rd day, at least.  There was a stretch (when my neighbour books off from his mine job to hay) that it rained 5 out of 7 days!
Seriously, how do those of you that live in places where lots of rain is normal get your hay put up?

Then there was the challenge of finding someone to hire to cut & bale our hay.  This is our 3rd summer here and neither AP nor TW, who each did our hay the last two years, were able to this year.
When we bought our place Pie & I had talked about buying baling equipment and pretty much everyone laughed at us and told us what a waste of our time & money that would be.  This year most of those same people were saying "Why don't you get your own equipment?" lol
Well with how things were going we looked at used stuff and thanks to my awesome stepdad B we bought an old self propelled swather and a used square baler.  Small world moment, I had talked to the swather guy on the phone but I didn't realize it was someone I KNOW until I pulled into his yard... it was an older guy from sorting that always asks if Voodoo is for sale.
In the meantime we were put in touch with a neighbour and he had the time to do our hay, and wanted to.  Funny how many people think it's not worth their time... I wouldn't be so quick to turn down a grand or so! lol

So the end result, our hay barn is stuffed full of small, hard-core rounds and there are 7 more sitting outside.  Also I have a lead on some squares that aren't too rich & were baled when it was dry and are available at a reasonable price (delivery included!).  Squares are always handy to have around.  AND next year we should be set to do our own hay! (well, B is set to do the hay lol) 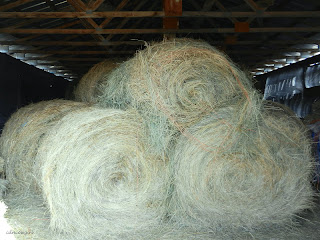 The back rows are 9 bales across, 5 on the bottom row, 4 on the top.  There's "stuff" on the sides at the front so Pie could only get 3 bales in the front two rows.
(stuff... a huge bag of oats for the cows, straw bales, pallets and the few square bales I had left) 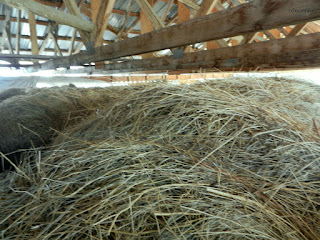 Check it out, literally stuffed to the rafters! :)

I figured it out, if we had had to buy this hay this year it would have cost us close to $3000.  We spent considerably less than that to have someone else cut & bale our field!
at September 04, 2012