About those unimpressed cats

Yikes!  I meant to fill y'all in on the unimpressed barn kitties a bit sooner, then time got away from me.  Things have been a tad busy.  And are looking to get busier (hey at least I'll have something to blog about lol)

Anyway, I had shown you how unimpressed the barn kitties were looking.  And really why shouldn't they when Pie & I had the NERVE to bring home THIS: 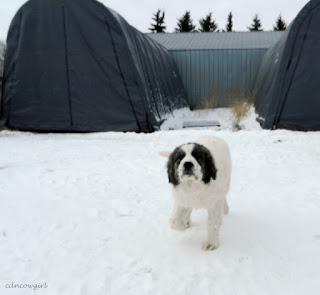 Meet Hera.  She's our new LGD, a 5 month old Great Pyrenees puppy.  Our awesome small animal vet Doc L (Moose's mom!) had told us about one of her clients having a litter of really nice pups after Echo went missing, we just weren't ready at the time.
Well with how bad the coyotes have been lately, and with planning on getting chickens and at some point those Dexters will be having teeny calves (they're not bred yet, they're still too young) we decided that a livestock guardian isn't really just a 'want' its going to be a need.  Turns out there were four female pups left from that litter.
I had never seen or heard of Pyr pups other than the white/cream, this whole litter had badger markings!
The cats aren't too impressed, but they seem to be slowly coming around.  After all who could resist this face? 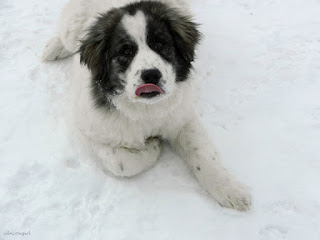 (not to mention I know the coyotes have been in the pens by the barn and the shelter belt trees between the house & barn! so the cats better learn to appreciate Hera, she'll be protecting them!)
at February 28, 2012