Sunday I went and visited my friend Jacquie, she's like a big sister or an aunt.  We don't get the chance to visit very often.  Jacq & her hubby are farmers so their schedule is pretty busy and y'all know Pie & I have a weird schedule.  Then add in that they live North of the city and we're West/Southwest of the city, so its not like we're neighbours.  Usually I only get to see Jacq & Ben at sorting or penning (dang I hope there's penning this winter!)
Jacquie & I had set Sunday aside for a good visit.  I ended up being gone from home almost all day and didn't get anything done at home... but like the title says it was time well wasted. :)
Its been about a year since I've been out to their farm.  Zara, from yesterday's post, is a new addition since I was there last.  And their heeler Ringer sure has grown up into a nice dog: 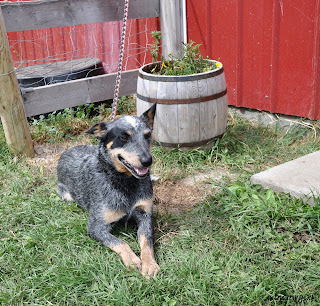 Ringer tied up out of the way
while some horse doctoring was going on
Jacq & Ben are "late in life farmers".  They started 5 years ago, following Ben's life long dream.  I personally think that's pretty awesome!!  They raise cattle (Black Angus I believe) and sheep, and of course have horses and a donkey (I missed getting Chili's picture!)  The sheep are where Zara comes in.  She's not just a pretty yard ornament.  She and her buddy Achmed protect the sheep. 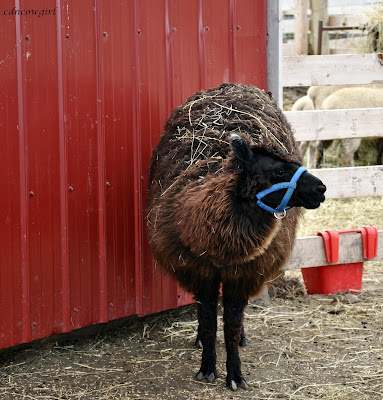 Achmed the llaca
she's a cross of llama & alpaca
Achmed isn't as friendly as Zara.  She's a bit more aloof and timid.  Also whenever she got close she screwed up her face like she was considering spitting at the camera.
I personally think that Zara is prettier, then again most alpacas seem cuter to me than llamas.  But I have to say that I love the little white tips on Achmed's ears: 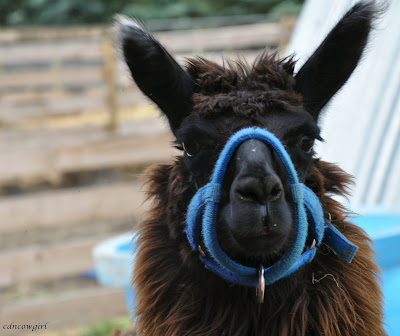 Another look at the little beauty queen Zara 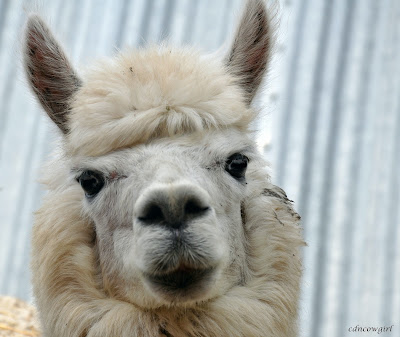 Zara also has a baby, Apu.  She's not a lot bigger than the sheep she helps protect! 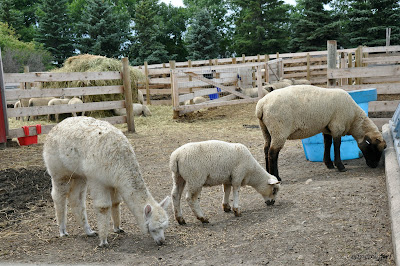 The llaca & alpaca do a good job protecting 'their' sheep.  This spring one of Jacq & Ben's neighbours lost 25 sheep to coyotes, and they had a donkey and dogs to protect them.  Jacq & Ben didn't lose one!  And its not like they don't have predators.  They've seen coyotes eating the placenta from when the cows calve and they even saw three coyotes playing in the straw in the field where they sometimes keep sheep!
at August 16, 2011