**This post is NHR and might be a bit 'too personal' but I think its something I need to just get out of my system**
My Grampie has been on my mind a lot lately.  It seems that every few days something happens, or I read or see something that makes me think of him.  Grampie passed away July 8th.  Although I wanted to pay tribute to him, I couldn't really get it together to write about him then, even now I'm sitting here with tears streaming.
He had been in a care home for some time, after Grammie passed (quite awhile ago) it was discovered that he had Alzheimer's.  Mom called me at work on the 7th and let me know that he wasn't doing well and to expect the worst.  We talked about maybe taking a trip East to see him but the next day Auntie M called Mom and let her know he had died.  I hadn't expected soon to be that soon.
(Most of my relatives are in New Brunswick.  My parents moved out to Saskatchewan when I was very young)
I think I felt guilty for not getting there to see him, the last time I had seen him was a couple years ago when I went East for my Dad's kidney transplant.  And since moving here when I was little I had only seen him a few times.  Until the last few years I just couldn't afford to travel like that, and then when I could I couldn't get the time to go.
Grampie was the first man in my life.  I didn't have a father until my parents got married when I was about 2ish.  My earliest memories are of Grampie and Grammie, playing with her Red Rose tea figurines (Mom brought a box of them back for me after Grammie passed, they were the only thing I wanted).
Gathering eggs from Grammie's hens.  The day that Grampie came home with a dead rabbit, which I happened to see as he came in the door.
I remember the day that I was banned from the barn.  The cows were being dehorned and they didn't want me to witness that.  Afterward when I saw the cows I felt bad for them and told Grampie he had to give them extra grain lol.
But probably the thing I remember most is "helping" Grampie feed cows.  Of going up into the loft and watching as he threw hay down, he was good enough to let me think I was helping with that even though I was far too little to actually help (I only found out a few years ago that Mom was always scared when Grampie took me up in the loft).  Going down and sweeping the leftover bits of hay from the alleyway to the feeders in front of the cows... making sure that it was fairly distributed, except of course that my favourites got a bit more and the one cow I didn't like got a bit less (not really sure why I didn't like her but I distinctly remember strongly disliking one).  And that broom, it had to have been almost twice as tall as me!  I remember petting the big ol' red bull with his white curls on his forehead.  Grampie was so nervous, he knew I liked the bull and that the bull was friendly and liked attention, but still he was a bull... one swing of that big head and there I'd have gone!
I have a more recent photo of Grampie, but its not 'him' to me.  He had gotten thin and frail.  When he passed away he was under 100 lbs, being in his early 90s he weighed just a tad more than he was old.  Instead I like to remember Grampie as strong and healthy, like in the photo below. 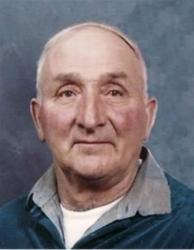