Two weeks ago the ponies all got a bit of a surprise... you can see here they know something is up! 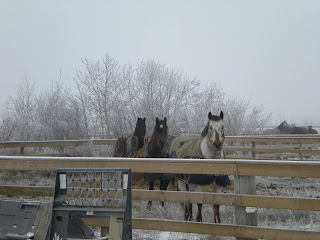 I had pulled my truck & trailer up in front of the barn. I laughed when I walked around the truck and saw them in the corral. I was grateful my camera was in my pocket for the above pic! 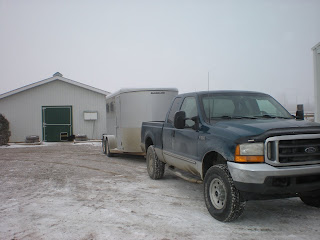 You know how some horses are SO expressive? You can almost read their minds? Well I wish I had pics of the looks on the boys faces when I loaded Cessa up. She has not gone for a "car ride" in at least two years. Those boys were so shocked. It was pretty darn funny. Good ole Cessa on the other hand walked up to the trailer, took a look inside and when I said "Step up" she got right in. That's my girl!
Now where was she going? Well I wanted to have Dr. Chris take a look at that wound she got when she was kicked about a month ago. Dr. Chris had been in our restaurant the week after it happened and asked how my horses were doing. I told her about the kick, showed her the pics and described it. She said it sounded good but to keep an eye on it. Well it was still looking pretty good but it also looked like the start of some infection was setting in. So I made the appointment and a few days later here we were, off to the vet.
The roads were not nice that day. Not horrible but not great. There was some hoar frost and that always seems to make the roads a bit icky for driving, but worse was the fog. It doesn't look like much in this pic but this was a pretty clear spot. Most of the way the distance you could see was about 1/2 a km. 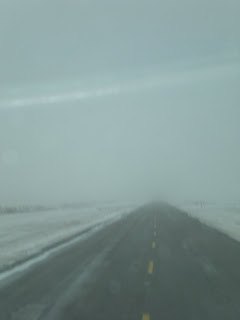 I got to SLS/Corman Park Veterinary Service and my first thought was "Dang! WHY did I book for Friday?!" I had totally forgot that almost every Friday there was a sale. (SLS is Saskatoon Livestock Sales)
That Friday there was a bred heifer sale and the lot was FILLED with cars, trucks and trucks & trailers. I had no idea where to park, let alone where they wanted me to take Cessa. So I parked right in front of the main doors! lol
It was just for a moment. I ran inside and to the vet office to ask where they wanted me. Dr. Chris was right there and she showed me a side door I could pull around to so she could take a quick peek before we brought Cessa inside.
I drove around to that door and saw the parking situation. Vehicles lined up against the building with a bit of a gap and more rows of vehicles. And across from them MORE rows of vehicles. I could've just pulled straight across and blocked everyone but that's a bit of a jackass move. But if I drove straight in I'd have to back out. Now I CAN back up but I'm not great at it, seeing as there was no getting around it I thought, "Suck it up Buttercup. Park this sucker."
hey Mikey, check it out! lol 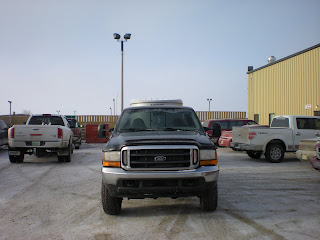 I backed in... there was NO room to back straight in. I had to pull ahead and turn as I backed in. When Dr. Chris and the vet tech came out they were both impressed. In fact Dr. Chris said she wouldn't have backed in, that she'd have just blocked everyone else! lol
After taking a quick peek at Cessa's wound and deciding that yes indeed it needed to be cleaned up and looked at we decided to take Cess into the show barn. I unloaded her and led her around the outside of the building, through a gate and into the barn. Dr. C shaved around the wound, cleaned it and examined it. Cessa stood like an angel the whole time. She's usually pretty good but she has had her moments with some vets. Dr. C said that it's looking pretty good. Although she did wonder about some pain from it because of how Cessa twisted her leg a bit when she walked. I explained that she's done that for years, its just how she moves. (like Mrs Mom says... watch your horses move. Know what's normal for them.) After looking her over Dr. C agreed, everything was looking good.
When I led Cessa back around the building to the trailer this old timer was walking out. He smiled and said "Hey now, you're not selling that fine horse here are you?"
I said "At a cattle sale? I don't think so, I wouldn't get much!" and laughed. We talked for a few minutes while he petted her and I let him know she was there to see the vet but was in pretty good condition. And I made a point of letting him know she is enjoying her retirement at her final home. :)
Dr. C prescribed an antibiotic powder to add to Cessa's feed and to clean the wound every few days. She also gave me a bottle of blue wound spray... the one she had used which had "issues". That sucker leaks everywhere! lol The antibiotic seems to have worked. There is not even a hint of infection now. A gross side note, it gave Cessa some really runny diarrhea... ick. I really need to wash her tail now!
Thankfully on the trip home the fog had finally lifted. Just the hoar frost remained and the roads were much better! 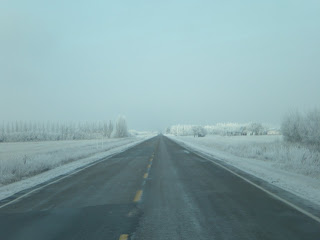