When Ed first gave us "Sports" as a theme for this week's Sunday Stills I was thinking "Great!" You see I was planning on going to some of the local rinks and getting some hockey and figure skating photos, maybe some curling.
Then Mother Nature intervened. We had a major storm come through this way and honestly my first thought was "Yaaay we finally have snow!!!" (there hasn't been much this winter, at least not here) Then I realized I wouldn't be able to go get any photos. There is not much going on in Saskatoon today... even a lot of churches cancelled services!
So once again I dug through my archives, and seeing as I wasn't prepared for a sports challenge I have no baseball, soccer, football, basketball, etc. BUT I have loads of horses and despite what some people may think riding IS a sport!! So here you go, Sunday Stills - Sports 'cowgirl' style:

I took these two when Julie, Kimfer and I rode down to the river from Julie's farm. It was HOT and we took full advantage of the water (please keep in mind that I shot these from the back of my horse while riding): 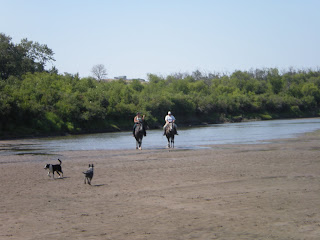 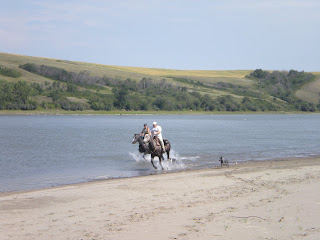 ** please note this is not the same 2nd pic I originally posted. Thanks to Shirley's help I was able to remove it but it insists on loading sideways so I've replaced it with this (similar) pic. The first pic had the horses just running into the frame on the right and the background was nicer. Also the angle was slightly different and you could see both horses seperately and clearly. This photo still shows the fun we had racing along the edge of the beach :) 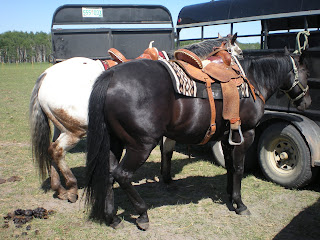 Barrel racing indoors last winter (at Sandhills Stables) Due to the lighting, the speed, the dust and the moisture taking photos was tricky. Pretty much none of them turned out but I like the way the background is mostly in focus and the horse and rider are just a blur streaking by. 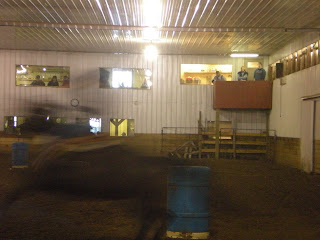 Ace & Brenda working together during a run at Team Sorting. 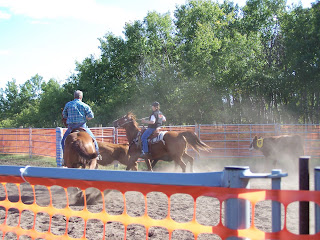 Ace during a run at Team Sorting. 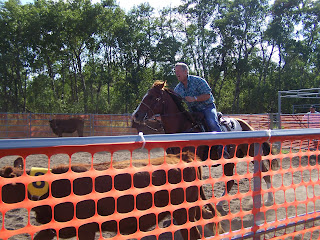 * Team Sorting - two riders have to sort numbered cattle from one pen into another in the proper order (chosen at random). If a cow goes into the pen in the wrong order, or goes back into the starting pen once its been sorted, you are disqualified. Oh, and there's a time limit and extra cows that have no numbers and must remain in the start pen at all times!


**All photos are straight out of camera and were taken with my little Nikon S210 (pocket sized, its perfect for taking photos while riding!)