I did it... I shot my horse. Well horses, both the boys.
Applejack was good. He was first and he didn't even see it coming so of course he was fine. 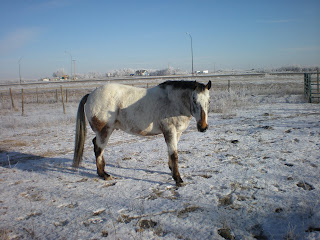 Voodoo saw it coming, probably at least partly because Applejack was first. There was no drama though. Just a quick shot and it was all over. 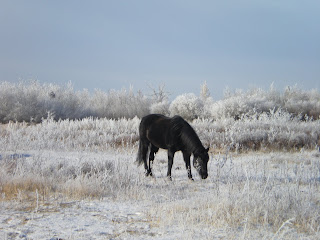 This is blogworthy for me because for a long time now I didn't think I would be able to do it. I used to give shots all the time. When vaccinations were due, no problem! Took the needle in hand and went about it. When Cessa had her abcess (absolutely disgusting, on her withers... that's a story for another day!) she needed two shots of antibiotic twice a day. Again no problem, even giving them in the butt! Which is quite a bit different than the neck.
Then a few years ago it all changed. I'd go up to the horse with needle in hand, and freeze. Sometimes I'd be so sure I'd do it that the needle would stop just barely in the hair!
I'm not sure exactly why I suddenly could no longer give a needle. There was no dramatic reaction from a horse, no bad experience. I just couldn't. The only thing that I can possibly think of that may have caused my freeze ups was that there had been an sudden onslaught of stories in the equine magazines about all the potential things that could go wrong and what could happen. Maybe that was it?
(have you ever noticed that no matter which magazines you read there seems to be a trend about what is being reported?)
If you recall a couple months ago Kimfer took Miss Isis to the vet and he recommended a joint supplement. Well its an injectable glucosamine supplement. Basically the same thing I give Cessa except hers is powdered. 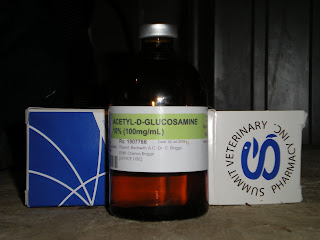 Since the boys aren't getting grain I decided to give this injectable supplement a try. Its a weekly shot, or you can do three weeks on and one week off with the dosage slightly tweaked.
Kimfer did the first few for me but three weeks ago she said "Suck it up Buttercup" and forced me to do it myself! :o She told me I needed to get over this mental block, and she was right. It was time for me to put on my big girl panties and do something that I knew I could do because I used to do it all the time.
Good friend that she is she said she'd be right there with me. That she'd literally hold my hand if I needed her to. It never did come to that but she was right there with me encouraging me. It didn't hurt that I know both boys are very good for needles.
I made it through that first week and the second week Pie came with me so he could hold the horses. Smooth sailing! In fact when I did the first one he was petting Voodoo's nose and said "Let me know when you're ready" I just laughed because the needle was in and the syringe was already half empty.
Then this week I went out completely by myself.... 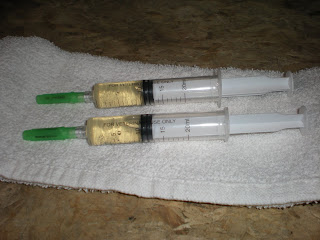 Prepped the needles, brought the horses in and injected them without a 'helper' of any kind! Funny how reclaiming such a small thing makes me so happy (and to be honest proud)